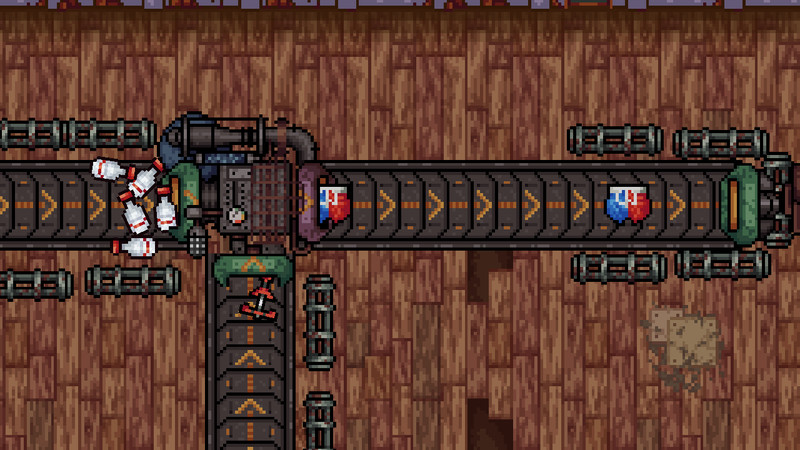 PLEASE NOTE: This is intentionally a quick play -- by design, you can beat this game in about an hour. If you have some extra time, after you beat the game you can: unlock achievements, search for all the items, easily mod in your own items, try the new game+ mode, go outside, feed the baby, water the plants, realize you don't have a baby, water the plants again, oh god whose baby is this, eat some chili, eat the plants, etc, etc.

Create products by combining the natural resources of our glorious country. Refine those products to make weapons! How about... vodka + exercise machine = Vladimir Putin's gym shorts? Its manly odor is both powerful and deadly.

Now that you've figured out how to build one weapon, can you make hundreds of them? Build out your factory for mass production with conveyor belts, barriers, pushers, black holes... wait... why did you put a black hole in the factory?! Nooooo

Now that we're mass producing weapons, we can sell those off and upgrade the factory to build more profitable (and complex) weapons. Discover new technology phases like Sand Age, Copper Age, Iron Age, and the most advanced technology: Potato Age. 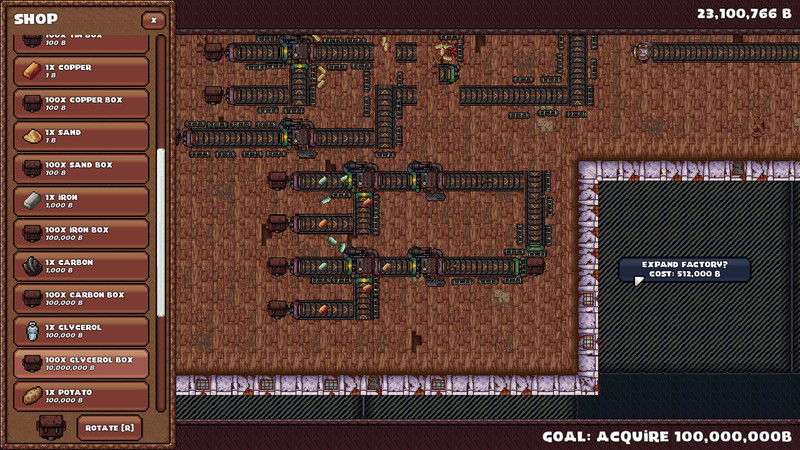 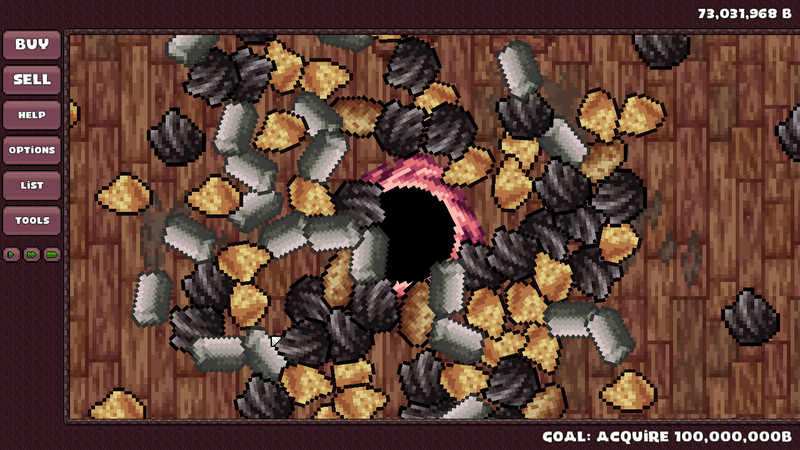 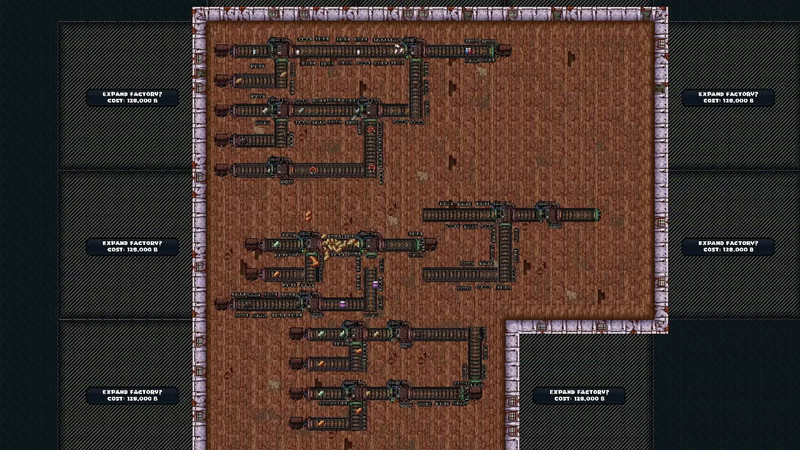 It supposedly has some replayability through a reset style system. The problem is that once you've learned all the recipes (which you will probably do in your first hour or two of play), then resetting simply becomes a case of rinse-and-repeat the exact same production lines with no significant changes to either difficulty or objectives.

If you don't believe me, try it for yourself, then use the steam refund system and get your money back...... pretty bad game waste of money do not buy!. Simplistic, straightforward gameplay that rewards and progresses based on your experimentality. Simply, you have resources that you put into "input machines" which become new resources. These new resources mix in various combinations with other resources with the ultimate goal of creating weapons which you can then sell. However, this isn't just about experimenting with resources, it's about efficiency and automation and your ultimate goal is to have a fully functioning factory that requires very little input from the player. Slap on a slightly, command and conquer-esque Soviet aesthetic and you have March of Industry.

Honestly, I find the core concepts to be a ton of fun and it's actually rather engaging and addicting trying to find new weapon combinations but there is just not enough content here for any type of extended play. Graphically, it's your usual 16 bit, pixelized look and the game becomes rather challenging rather quickly. Thankfully, the game isn't overly punishing and you should be able to rectify any mistakes you make without too much fear of having to start over. Then again, if you make a lot of mistakes then you've very little choice but to start your business all over again.

After extended playing, I've found there are a couple of negative issues. First, is the sound can get really annoying really quickly. If you sell items one by one, you have the "narrator" looping so you'll probably end up turning the sound off altogether anyway. Secondly, when resources get bunched up in your input machines, they get cluttered really badly and you have to select the resources one by one... which is sort of a pain in the\u2665\u2665\u2665\u2665\u2665 It'd be nice if the dev could add a double click feature which lets you select all of one resource in a general area or something. The worst problem is an almost complete lack of replayability. Sure you are suggested to restart your factories multiple times but what's the point? If I didn't enjoy the core game concepts so much, this would almost be a complete deal breaker.

All in all, it's simple and it's fun. 9.99 isn't a bad price but for the current content, I'd like to see that price go down to about 4.99 or there to be some additional content because the current version of the game can be beat in only a few hours.. Slightly recommended.

Gameplay Footage:
https:\/\/www.youtube.com\/watch?v=1NiZUTdeMBQ<\/a>. This game is a cheap clone of big pharma and factorio (coming to steam soon). It lasts maybe an hour of play then it expects you to jump through the hoop of prestiging, like in CoD or idle games. The only difference is in those games prestiging is used to extend the life of the game by forcing you to restart to earn bonuses. In this game, you restart to earn useless machines that are purely convenience.

The whole challenge in this game is derived from matching resources together to complete objectives and earn money. Once you prestige you do the exact same thing all over again, with the same knowledge of combinations. It lasts maybe and hour, and after that it's a game all about waiting. Unless you choose to install mods, this game isn't worth the price of admission.. Its a short game... And by short I mean they lack more items...
They could put more machines like 3 input or even 4, diagonal lines and even more serius items, I mean, internet+vodka=Porn with good writings... Its a good game, I really like they way you construct and made your own efficency producction, but I guess is what you get for 3 bucks....

Once again I’m thrust into the world of making arms for money. Wait, what did I say again? Ignore that part. But here you are, making arms for the Motherland. It’s a simple premise of test and build and sell to expand and reset to be able to build better and faster… for funzies! Most of the time those types of games don’t interest me much at all. I’ve played a few games based on resetting to get a bonus and they just leave me with a bad taste. March of Industry is a great example of how to make that formula fun.

You’ll start out with simple, basic materials and will need to work your way up to the more advanced ingredients and weaponry as you progress through the ages. The ages thing does feel a bit tacked on, but I get what they were going for. It’s just so easy to work through the “ages” that it feels more like a “prove you can work with this” test to gain access to better materials. Would that have been better? I’m not completely sure, but I appreciate what they were going for. The interesting part of all of this is that you’re never given any specific blueprints. That means you’ll need to figure out which ingredients make which parts or weapons and then sell or make them into more complex parts or weapons. Maybe for some players the ages will take ages to get through, but I would like to give the players the benefit of the doubt.

You’ll probably get through the ages rather quickly if you’re going to sit down and plow through March of Industry like I mentioned. If you turn it on for only a few minutes at a time, it will be a different story. The longevity of this game looks to be in the achievements and mods. There are mods for new parts and weapons that you’ll have to figure out how to build as well as figure out if they are more cost efficient to build as opposed to other weapons that you already can build. Achievement wise, the two that will take you the longest will be discovering all of the blueprints first and then maximizing the size of your factory. Don’t cheat to find out what the correct blueprints are, that kills the point of this whole game. Test and see. After all, “Discovery requires experimentation.”

These achievements are going to be tackled together for my play-through. It only makes sense due to the abnormal amount of money that is required to maximize your factory’s size. I plan on building my money machines and then just experimenting on the side. What’s a money machine? Well, when you figure out what’s the cheapest to build and sells for the most, you can usually buy the 100 packs of the materials and have a series of conveyors taking those parts into machines that will combine them and then send the end product into an auto-selling crate. All very clean and proper. So I just have to make sure they have the supplies they need and then I can experiment on the side while the money flows in and out of my coffers. If only I could figure out how to auto-purchase ingredients… I’m sure it’s possible…

While it may not do much, it does what it does well. I am enjoying the puzzle of figuring out all of the different combinations in March of Industry. I’m not sure why I’m finding this so fun… but I am and I’ll take it. It’s all about fun here on The Backlog and March of Industry delivers for me. Will it forever change your mind about a genre, probably not, but if you can catch a good sale and you like this type/style of game, you should pick it up because I’m guessing you’ll enjoy it.