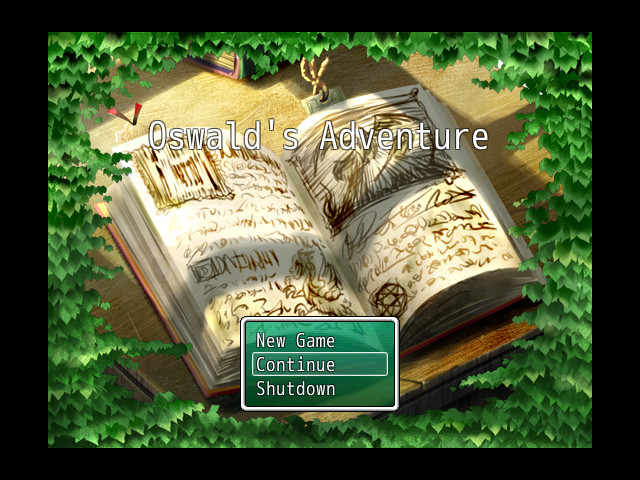 Follow Oswald in his short adventure to find his sister. Will he find her? Or is there a surprise waiting for him?

Oswald's sister has been missing for as long as he can remember... Now grown up and having learnt a few basic fighting skills, Oswald decided to embark on an adventure to search for his sister. Throughout his journey, Oswald will be able to recruit several companions, as he continues to travel through the forest, the desert, the ice mountains, and the fire volcanoes. He will certainly encounter all sorts of enemies, but fear not! There will be some legendary equipments for Oswald to obtain before he faces the final boss. 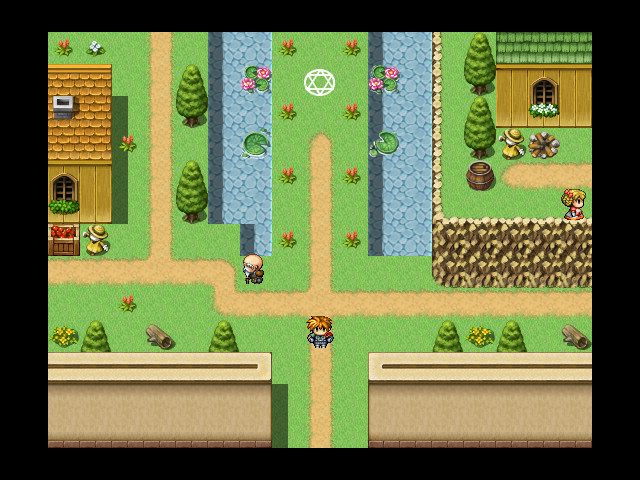 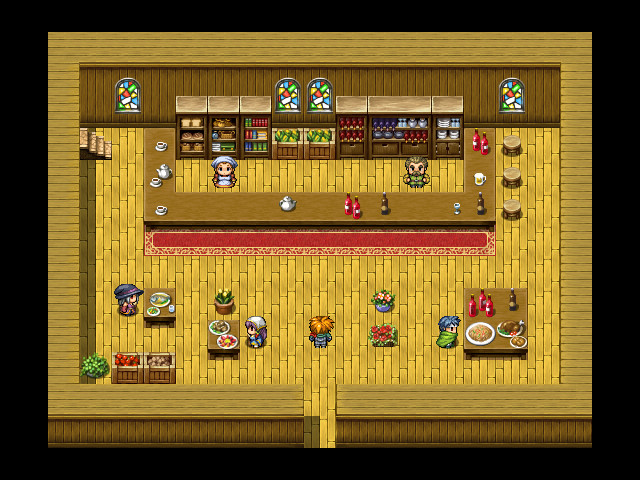 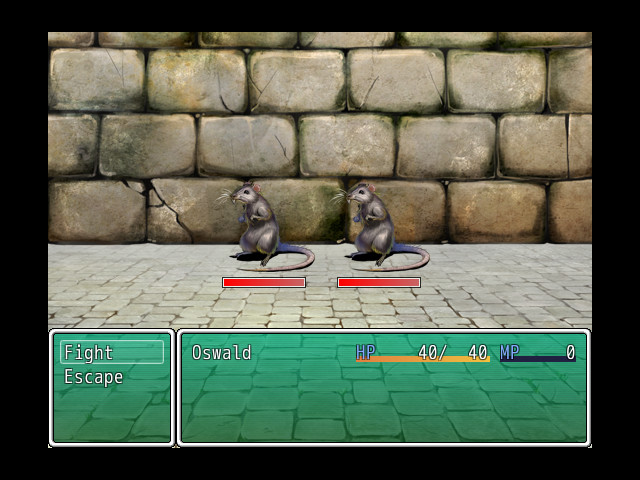 Normally I only review a game once I've completed it but I just finished the third dungeon in this, and my opinion may change, but I'm well enough into this that I can fairly say: THIS GAME IS TERRIBLE! Not just for some little things but for a litany of them! Here's a list to know what you are getting into:

1) This game is a GRIND, not just a small one either, you will be grinding for money pretty much from the start of the game to such an extreme, that it'll take you at least an hour before you reach the first boss AND beat it due to its stupidly high crit rate. Although I may have gotten a bad set of RNG the first few times I fought this boss since he got a crit on me virtually every round.

2) All of the characters start at lv 1, this wouldn't be bad if they were balanced in a way so that way a lv 1 Remy (your second character) was as strong as a lv 9 Oswald (your first character). But this problem compounds itsself to the point by the time you get Zara (your fourth and final member) the rest of your team ARE IN THEIR THIRTIES! This is aggregiously bad design, meaning of course MORE GRINDING!

3) Whenever a character joins you they start with the lowest tier of equipment they can possibly equip, and since this game has such a fetish for how expensive things are you need to grind MORE in order to purchase the gear to get them up to terms.

4) NOTHING, and I do mean NOTHING in this game has custom assets, or uses anything more than the base assets. Nothing is unique in the playable characters, and the music is the same set you've probably heard 100 times by this point.

5) The story is bare bones. Normally that's one of the main things you play an RPG for, but here its so minimalistic that its: Hey you are here and you need to go this place next! It's so repetitive and there's no changes in what you do though the game, no story bits, no character interactions, no nothing.

6) Your two 'mages' learn abilities at such an abyssmally slow rate that they are pretty useless until you get them relatively high leveled. It doesn't help that even by lv 30 your healer DOES NOT KNOW A SINGLE GROUP HEAL SKILL!

7) Despite the fact that Oswald is classified as a 'warrior' he can equip anything in the game, including rods and staves, which makes no sense from a contextual standpoint. but I digress

8) After every time you clear a dungeon the price for healing at the inn increases, HOWEVER, the inn on the world map run by the accessory shop owner DOES NOT. This becomes exceedingly silly after the third dungeon since the price jumps from 50 'gil' to 180 gil immediately. The prior jumps were reasonable, this one wasn't since the inn on the world map costs a flat 250 gil.

9) If you couldn't tell from above, they are obviously trying to rip off Final Fantasy's monetary system. However this game is so bare bones its kind of an insult to the term 'gil' and I didn't think that was possible!

10) The difficulty spikes are ridiculous in this, since after you get your third party member enemies will no longer spawn in singles, meaning that often times you will face 2\/3 enemies that are a bit too tough to really spawn in such numbers.

11) (I can't believe I forgot about this one!) All the characters and enemy damage are done in a big text block. This is especially given this style innately frustrating and the ONLY time I've seen it done in an RPGmaker game. the standard is usually you have a big row at the bottom showing all your character portraits and when an enemy hits you, you see which enemy is both attacking (via flashing) and which character they are attacking (via a big white number over the character portrait) Likewise the opposite is also true and shows how much damage you do to enemies in a far simpler fashion. Here I often feel like I have no knowledge of how much damage I'm doing to enemies or enemies to me!

12) It wasn't coded that enemies could cause status effects from normal attacks. Instead EVERY STATUS MOVE IS CLASSIFIED AS 'MAGIC'. This is honestly very, very dumb when you have rats casting poison, and scorpions casting daze. I know this is not something hard to program since so many RPGmaker games do this.

Needless to say this needs a vast amount of work before you put a price tag on it.. Finally! Something decent in RPG-maker games! :)

I love the game because I think it's got justttt the right balance ( \/ amount of playtime for the price, and grinding, and rather-simple storyline, etc). It also got a reasonable amount of achievements for the amount of playtime spent... and the story is not your typical RPG-maker "mushy" storyline.

During my playtime and journey to 100% achievements, I also did not encounter any bugs... This is very important to me, as I get easily annoyed \/ irritated when I find bugs in the game that I have purchased.

Overall = I had fun & yes, I will recommend it, especially to those who like short RPG games \/ old-school type.. I am a big fan of RPG Maker games and owned about 100+ of these games in my library.

I played Oswald's Adventure to completion and enjoyed it.
It's a nice short game. The developer says its a 8-12 hours game but it took me 17+ hours and quite a bit of grinding to get all the achievements. I actually enjoyed the grinding too, so it was all in good fun

The story is average but I love the recruiting mechanics. You cannot recruit for help unless you find the "business card" of the person you want to recruit. This prevent you from getting a strong team at the start of the game, and you will learn to treasure every single person that join you because you have to "sweat and toil" to get people to join your team.

The developer of this game is also extremely helpful and responsive. I posted a problem that prevent a certain achievement from triggering and within minutes the developer responded and started working on a patch to fix problem. I was able to resolved the problem with the new patch that the developer release in a couple of hours. The developer is also constantly trying to improve the game. Today, for example, he release another 24 new achievements to bring the total achievements up to 70.

I had a fun time with this game, and would be happy to recommend it.

. Love the Retro art.. it's like i'm back of being child because of this game. <3. Recommended. This remind me of old 2D JPRG game I use to play long time ago. I play the game until complete, my 100% achievements, and I enjoyed entirety. My favorite music from the game is at Ancient Pyramid. Easiest part was the 1st Basement dungeon. Most challenging part was getting the special achievements of Level 99 Oswald and 99,999 money. So I want to suggest maybe to add bonus achievements to reward players who play get these extra achievements?? If can get Japanese texts \/ translation it's good and I can recommend the game to my other friends with not-so-good English? Thank you.