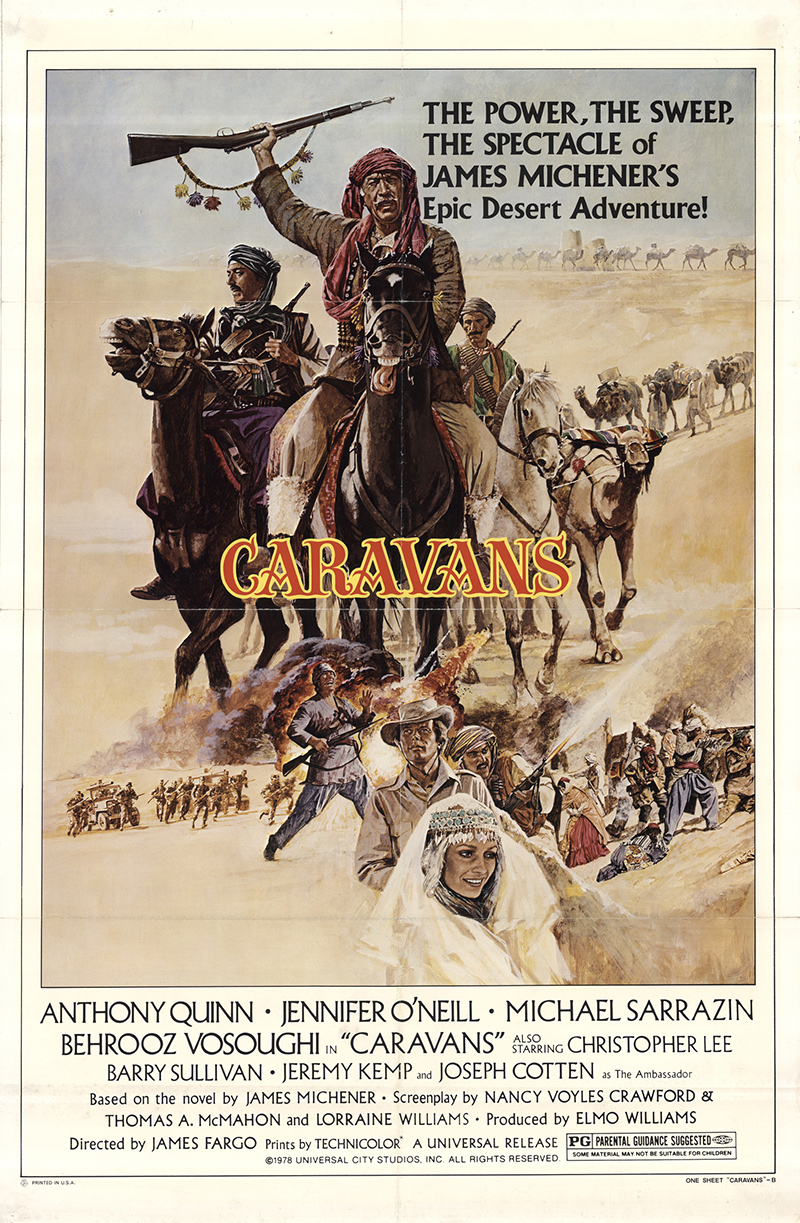 The story happens in 1948, in a fictional country, called Zakharstan (in the novel "Caravans" is probably Afghanistan). Mark Miller (Michael Sarazyn) is a young U.S. Embassy employee who is responsible to follow Ellen Jasper (Jennifer O'Neill), the daughter of Senator Jasper, who later has married Colonel Nazrullah (Behrouz Vossoughi) and disappeared. During the investigation, Mark Miller (Michael Sarazyn) realizes that Ellen Jasper (Jennifer O'Neill) has escaped from her husband, Colonel Nazrullah (Behrouz Vossoughi), living among a tribe whose leader is Zulffiqar (Anthony Quinn). He will fail to convince her to be reunited with his father. But, Mark Miller (Michael Sarazyn) has realized that the leader of tribe is an outlaw who resists against the government's proposals for a permanent settlement of his tribe and also with cooperation of another rebel man, Shakkur (Mohamad Ali Keshavarz), are engaged to Russian arms trafficking ...
In 1948, at the U.S. embassy in Zadestan, a young diplomat is ordered to find the missing daughter of an influential American senator.
The movie, Caravans, was filmed in Isfahan, Iran, and near by the city out in the desert. I had the opportunity to visit the sets on several occasions. Some of the film was shot at what was then called the Shah Abbas Hotel, the best hotel in town and one which used to be a Caravanseri. It was and still is a beautiful hotel, with much blue and white tile walls and brass chaise lamps. Across from its landscaped Persian garden courtyard is an alcove where one of the scenes of the movie was filmed. It was a tight fit, with many cameras and crew packed into its small space. They did a number of takes that day. Most of the cast stayed at this hotel. Rumors claimed Anthony Quinn didn't like his mattress and threw it out his window. My Time Magazine mentioned that Jennifer O'Neill complained about the lack of dry cleaners. I found these stories amusing. I also got invited to a desert filming near Isfahan and I had a wonderful day on the set. That day, they were shooting the caravan going by as well as Jennifer O'Neill in a tent with some other women. I was able to get some photographs of some of the actors, but when I asked Anthony Quinn if I could take his picture, he asked me not to since he wasn't wearing makeup. There was a good bit of time to kill between filming, and near sunset, some of the Iranian extras started doing a spontaneous mock dance fight using sticks. I heard group singing from Jennifer O'Neill's tent. It was a magical day, one I will never forget. I didn't have the chance to see Caravans until years later. Unfortunately, the movie itself isn't nearly as exciting as watching it get filmed.
I had the exceptional opportunity to be one of two Americans in-country to witness the filming of Caravans. It was filmed outside Isfahan, Iran and I was then the American Vice-Consul in Isfahan (read: second banana, of two). Our Consul, my lovable, affable boss, was David McGaffey and he and our wives enjoyed several opportunities to visit the set and to dine with the cast. The real setting of the story, I believe, was in Afghanistan. My tiny claim to fame is that my desk was the one used by Joseph Cotton, who played the American Ambassador. I had inherited the ambassadorial-size desk as a result of the closing of a consulate in Khoramshar many years earlier -- it filled my tiny office such that I had to squeeze to get by and sit at it. The crew borrowed several other props from our consulate, including, most notably, our official metal seal, which they masked over to say Embassy instead of Consulate, as best I recall.

The actors were superb, as was the costuming. It is hard to imagine, for example, that only one or two actors had "real" guns and the rest of the army had cleverly-painted sticks. Alas, the direction sank the movie, to my everlasting disappointment. Caravans is a great Michener read, but the movie died and my "6" is, I think, charitable and a salute to the fine folks who graced Isfahan with their presence back then, for several fun-filled weeks.