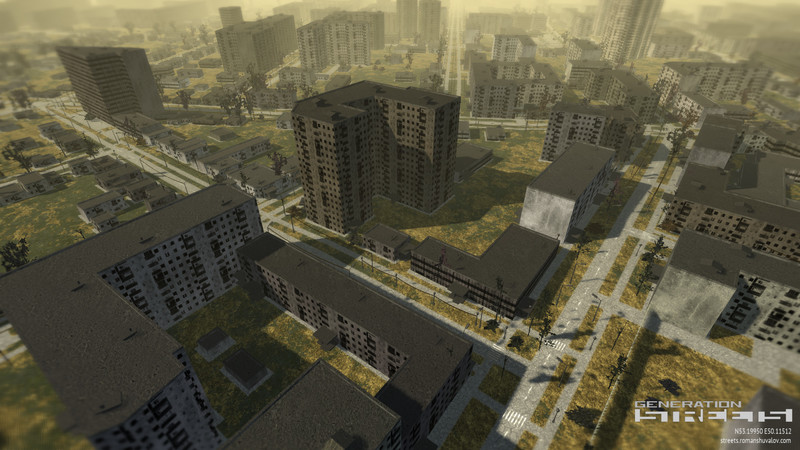 What if we take the real-world map and make all buildings three-dimensional? And then draw textures on them and put some trees, power lines and other visual garbage around? That's what:

In the same way, almost any point on Earth can be loaded into the game. Load your hometown, find your place and this casual shooter start giving you very unexpected impressions.

Warning: though the most places have a relatively high level of detail, it's impossible to render objects exactly as they look in the real world due to map mistakes or lack of geodata. Do not expect a 100-percent match. Places will look recognizable but no more. Also, some places are just completely missing on the map and will be not rendered. a09c17d780 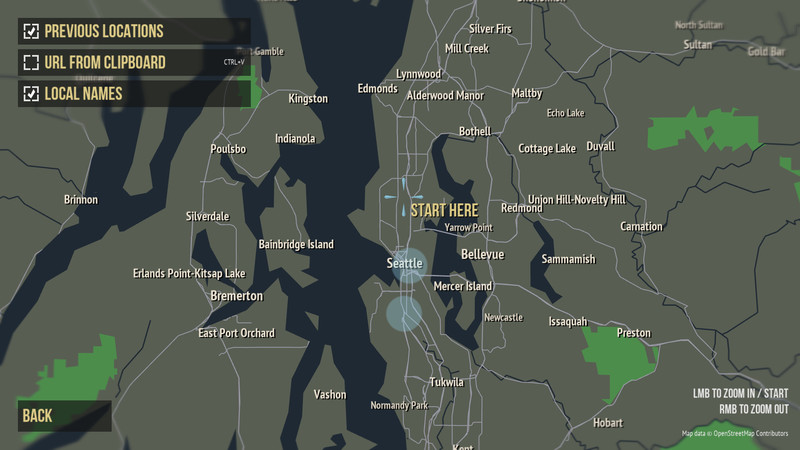 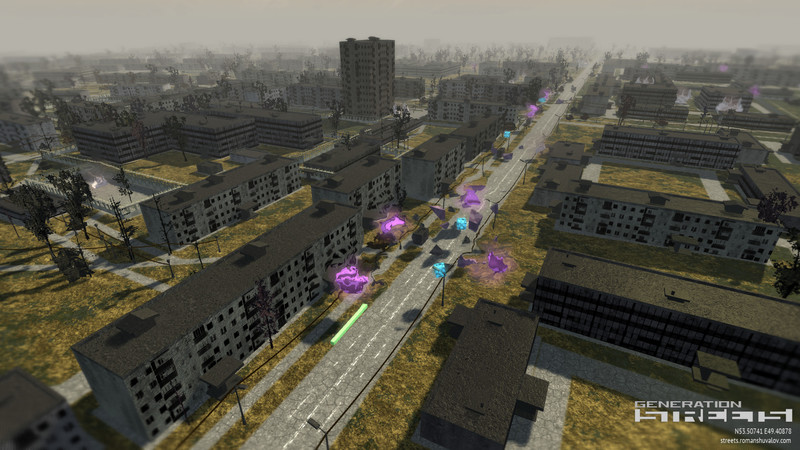 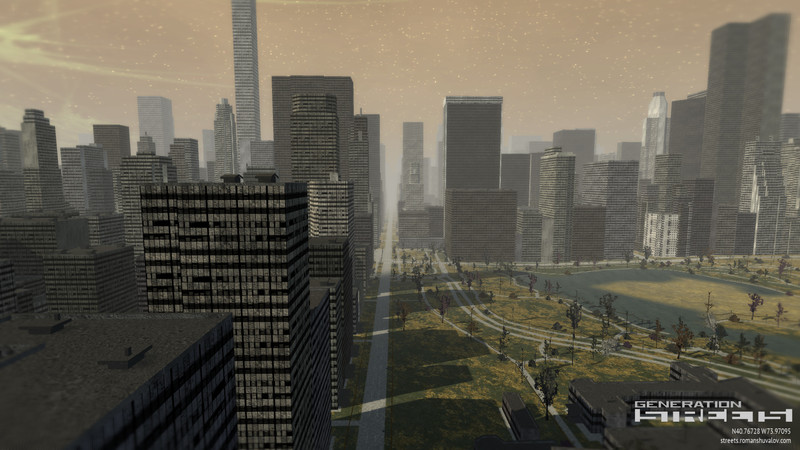 
I enjoyed the free roam option. Controls could be a bit better, but it was cool to fly around my home town, blowing up aliens ships. Game did crash a couople of times, when fluying over open water, but other than that fairly stable.
Would be really nice to have a compass, as it is easy to get turned around, especially when moving over lesser populated areas.

There are many (and genuine) reasons one may not recommend this game, and that's their opinion. However, Zaxtor99 has made a lot of baseless accusations that are demonstrably wrong. You can further tell that he is a troll because every time he makes a claim, and someone proves him wrong on Steam or on YouTube, he never responds. The dev even made some corrections about his assumptions and was polite, but Zaxtor99 never responded because he knew he was in the wrong and didn't want to admit it. Here, I will point out what claims he has made in his review and YouTube video, and give proof as to why they are wrong:

> Positive Russian reviews are a red flag, claimed dev was buying or making them himself

Apparently, games are only good if English speakers review them -- because we all know that people that don't speak English are PURE EVIL, right? \u00af\\_(\u30c4)_\/\u00af

On a serious note, take just a minute or two to throw the reviews into translate.google.com<\/a>, and you'll see they're mostly regular comments like any other. Not only that, but some of the Russian comments are negative. Why would the dev leave or buy negative reviews? Even the positive ones say there are things that can be improved. That much is true, the game is very new and new features are planned in the future... after all, this is an Early Access Game. It's to be expected.

But really, there's a simple explanation for why there are reviews in Russian:

Seriously, the developer is slavic, and regularly speaks Russian to other players in the Discussions. It makes sense that there are going to be people that are attracted from the Russian community, because he speaks their language and can advertise to them. It's plain and simple. Zaxtor99 is from Idaho, and I get people aren't very smart there... but come on, seriously?

> Claimed Unity assets were used for an easy asset flip

I'm not even sure if this game uses Unity. However, while there are... openstreetmap.org<\/a>, so if the buildings were assets that were downloaded from Unity, they would have a predetermined shape. As it stands, when the data is extracted, the shape and height are created from the data, and most buildings will have a unique structure taken directly from the information put on OSM, which are made by contributors like myself.

A commenter by the name of "Arne" on his YouTube video asked Zaxtor99 for proof that the buildings and such were assets. Instead of providing proof, Zaxtor99 waved off a flaw in his arguement for the sake of pride. Nonetheless, Arne did their due diligence and used Wireshark to prove that assets were not being pulled from the Unity store, but rather from the Developer's personal server in .gpak files.

This is incorrect, however. If you actually go to www.openstreetmap.org\" target=\"_blank\" rel=\"noopener\" >www.openstreetmap.org<\/a> and look at his home\/hometown ( search: Leland Drive, Canyon County, Idaho, 83687, USA ) you will see that no houses are even mapped there. The only thing that's actually mapped in his town is the Mall (which he said was missing at around 5:13 but then flew right over and around it at 5:33 while also stating the buildings were just basic assets, lmao).

I also noticed that when there's no houses mapped on residential streets, the dev made it so that residental streets will have basic houses lined along the road, to prevent maps from being completely empty. This is part of why Zaxtor99 believes the game is a basic asset flip. Apparently, instead of going literally anywhere in the world that would have better and more complete data in OSM, he only played in his dump of a hometown in Idaho. To put things into perspective, although I now live in Tacoma, WA, I come from a small town called Manor in Texas. If you go there in OSM, you will see that every house there is mapped out completely. If I pull it up in Generation Streets, you will see my entire hometown, where each house has its own unique and accurate structure (it's not perfect, but the dev is planning to improve on the world renderer). In contrast, Zaxtor99's hometown only has roads mapped, The only reason there are houses, is because the dev automatically puts them there when the data in OSM is empty.

So, all in all, DON'T TRUST Zaxtor99'S HOMETOWN AS AN EXAMPLE, BECAUSE EVERY PERSON'S HOMETOWN IS DIFFERENT -- MILEAGE WILL VARY BASED ON THE AMOUNT OF INFORMATION THAT'S ACTUALLY DOCUMENTED ON openstreetmap.org<\/a> , AND THE DEV SAYS THIS IN THE DESCRIPTION OF THE GAME. IF YOU WANT TO SEE YOUR HOMETOWN, MAP IT YOURSELF IN OSM (it took me 15 minutes to learn how to map, and I mapped my whole workplace's block in about 15 min), OR ASK AN OSM CONTRIBUTOR TO MAP OUT AN AREA.

Now, that's all the major points that I wanted to address from Zaxtor99's really crappy reviews. I would recommend you hop on over to his review or his channel and downvote his stuff, and let him know that if he wants to be taken seriously as a reviewer, then he needs to do so honestly, without disinformation. Now, here are my personal opinions on the game itself:

Generally speaking, the game is in Early Access. Zaxtor99 did have one thing right, in that the gameplay is a little boring. For me, that's ok. Right now, this feels more like a 3D rendered world map with an alien ship shooter mini-game on top. Since this is still in Early Access, I assume things with improve from here with details and bugs eventually being fixed.

Right now, you are simply put in a post-apocalyptic version of the world, and told that the world is overrun with aliens. You fly around in a futuristic saucer-like ship that has a laser machine-gun and some bombs. You can roam about the world and find and destroy some white pods that hold purple aliens and kill them, or build a base and fight some waves of them.

The controls can be a little janky sometimes, and the basic gun on the ship feels funny to shoot while strafing. It's also hard at times to judge how high you are in altitude when compared to the red alien motherships, and makes it hard to destroy them as they release the purple aliens.

Some recommendations: I would personally like to see more options with the ship, more options for different kinds of ships (like a futuristic jetplane), and weapon types like a laserbeam, and maybe the ability to land and take on the aliens from a foot-soldier POV. Ship upgrades and some enemy variance would go a LONG way for this game, and would make it more like a Bullet-Hell type of shooter. Also, it doesn't make sense for gravity to work on the ship. Another reason it can be hard to hit the motherships that usually sit in the air, is that gravity pulls the ship down, but tapping Space to keep altitude overcompensates. Honestly, the ship should sit statically at the altitude I leave it, not slowly go down. That's what the Ctrl key is for. If I'm in a futuristic spaceship, I should be able to hold my position in the air. :P

Overall, with the EA in mind, I give it a 6\/10, with future update... openstreetmap.org<\/a>. Otherwise, keep an eye out for future updates, it's surely going to improve. :). A great idea, and shows a lot of potential.

So far it's rather simplistic, but fingers crossed for updates, and even in its current state I would recommend this game at its current price if you really want to support this idea (As of review date, \u00a32.99). Maybe wait for a sale if you're only interested in gameplay (Which is fair, I mean you're here for games to play), or who knows, future updates may add more core gameplay. It's fun visiting familiar places, whizzing around and just playing about. From your home town, to tourist locations, to tiny islands in the middle of the ocean, there's all sorts of odd places you can visit.

As for actual gameplay, as I've stated it's rather simplistic. Shoot enemy 'pods', kill enemies and collect energy, spawn your own 'defence point' when you have enough energy, defend from swarms of enemies while blowing up spawner airships, repeat. Only two enemy types (rush melee blobs, and larger floating spawner blobs) currently, and then there's the 'pods' that don't really attack and only spawn enemy melee units when destroyed. Sadly there's no minimap or compass in game currently, so it's easy to get lost as you explore.

...And when you see or play this game, seeing those positive reviews giving this game an 11 out of 10 and comparing it to old school Quake, the red flags SHOULD be going off like crazy!

...Could this be yet another low effort asset reliant developer either using alt Steam accounts to praise his own game and\/or *gulp* buying positive reviews? Maybe I'm jumping to conclusions here and this may not be the case at all, but after playing this game, I am truly baffled at how so many people *love" this snorefest lazily developed game so much!

...Things that make you go Hmmmmm!

A big, fat shiny red and gold ZERO ASSET I ripped off of Google just for you Mr Roman Shuvalov! I can't want to see what "Roman Shove-A-Lot" will try and sell us next on Steam! ..I can hardly wait!. Great idea and cool implementation!

Flied for 20 minutes over my home area, then moved from there to my countryhouse. Flashbacks! The places are very recognizable, despite the textures not always correct. Then remembered there is also a simple game included, which is, suprisingly, rather nice.

The game\/instrument potential is very promising - exporting models could be a great opportunity for other games\/modes.

Please add the support for the pedestrian-like view, I'd like to walk slowly looking at the known places from a known perspective in-game :). Great idea and cool implementation!

Flied for 20 minutes over my home area, then moved from there to my countryhouse. Flashbacks! The places are very recognizable, despite the textures not always correct. Then remembered there is also a simple game included, which is, suprisingly, rather nice.

The game\/instrument potential is very promising - exporting models could be a great opportunity for other games\/modes.

Please add the support for the pedestrian-like view, I'd like to walk slowly looking at the known places from a known perspective in-game :) 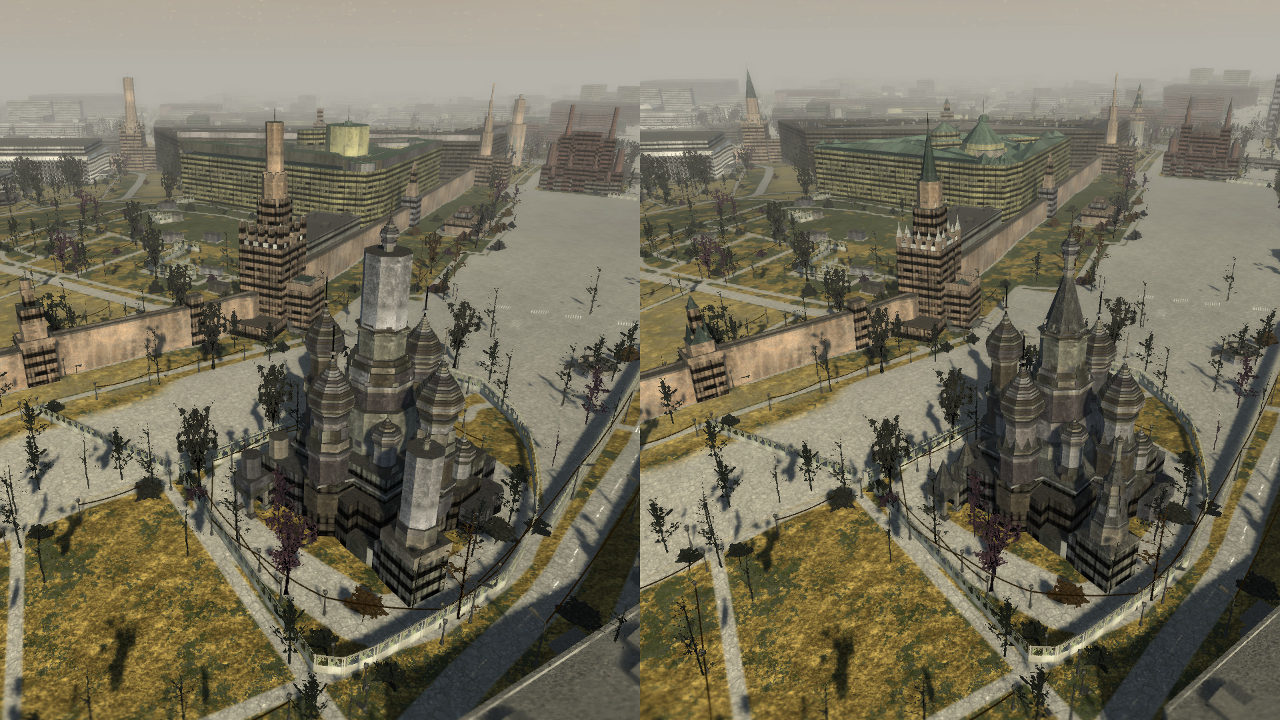 Working on the map editor is now in progress.. By the way, I am alive: 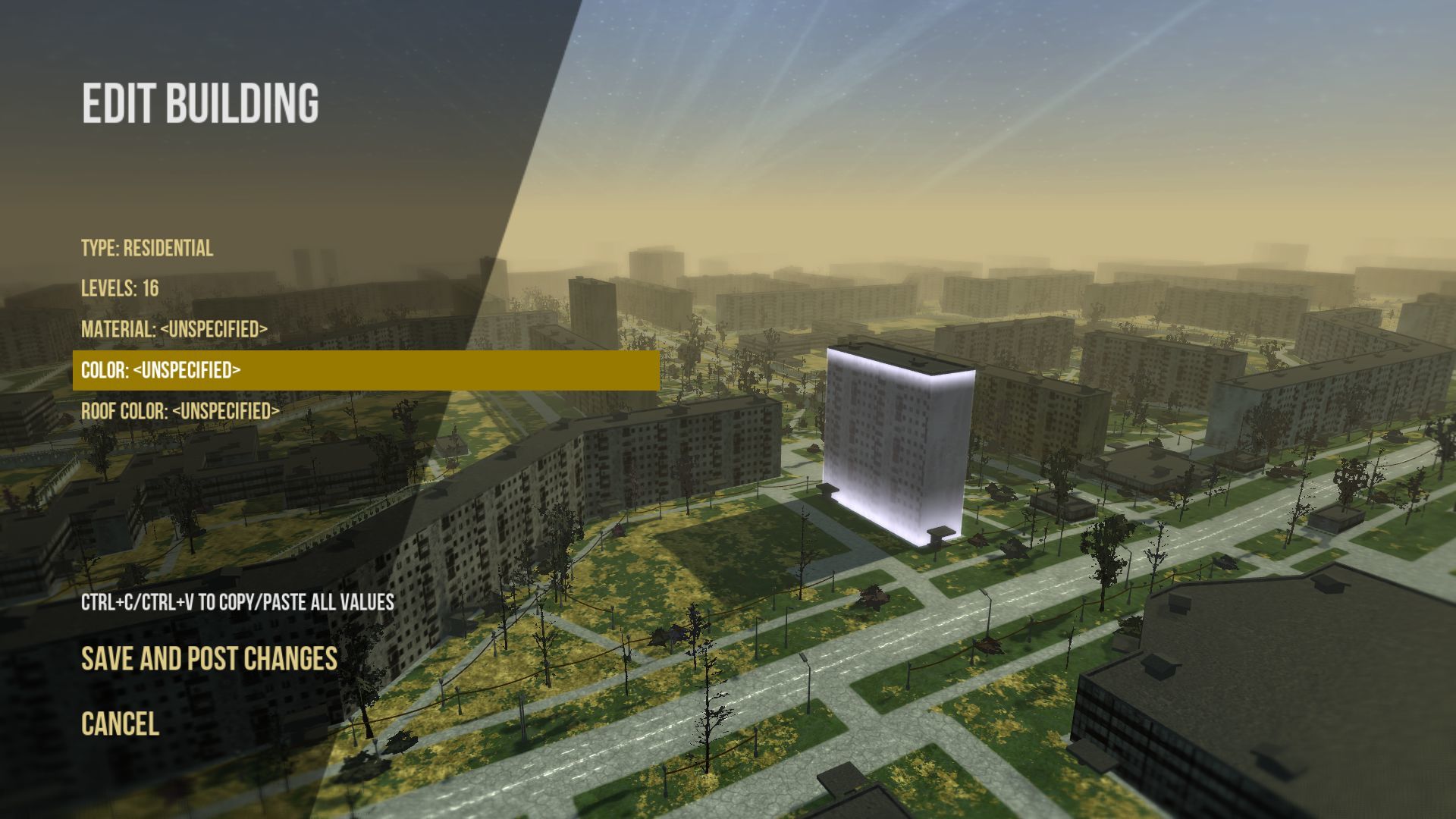 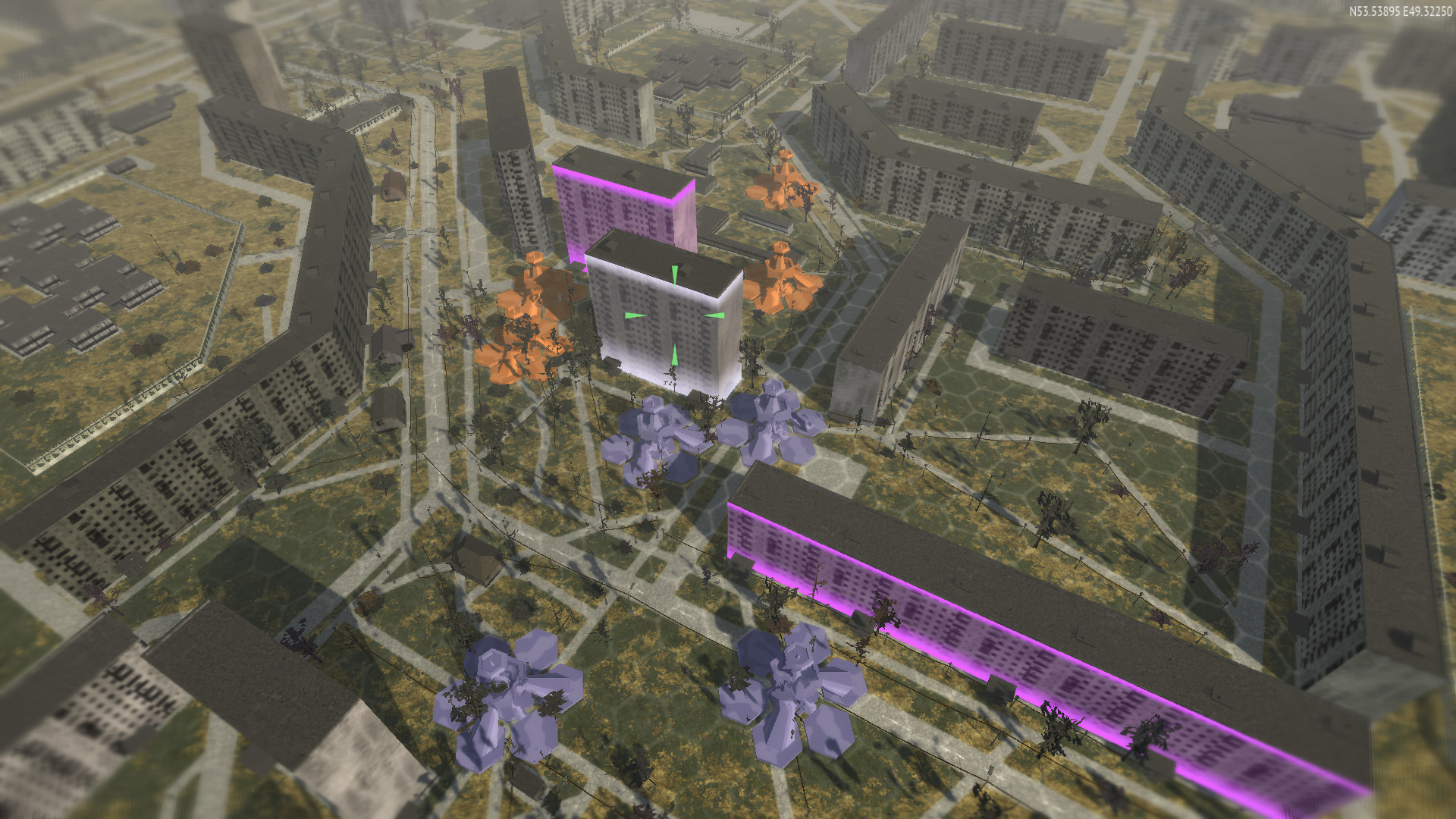