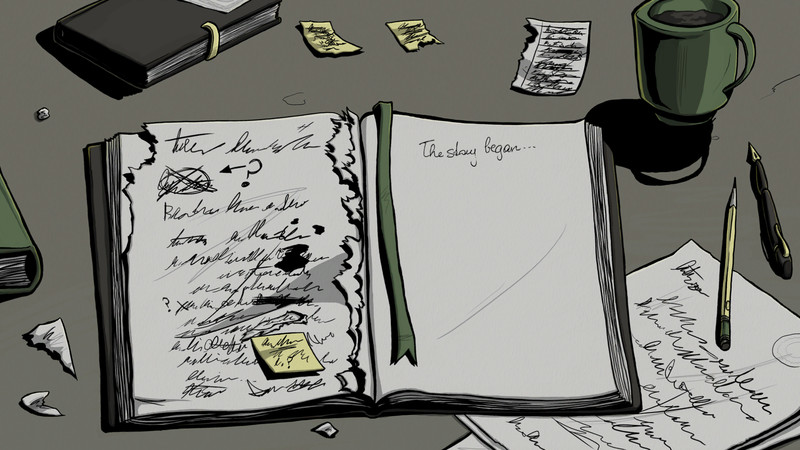 The Shopkeeper – An Interactive Short

A desperate man needs to find the right antique to impress a rich relative, but his choice will have dreadful consequences. The Shopkeeper is a point-and-click narrative game set in a space between the Twilight Zone, classic Lucasarts adventures, and Antiques Roadshow. 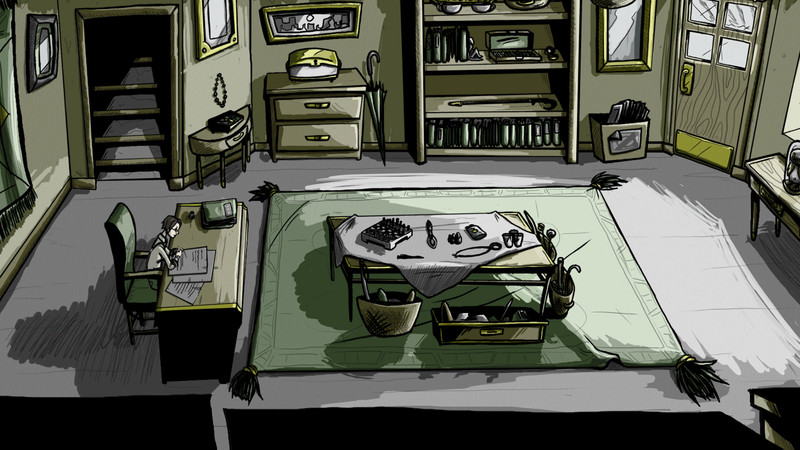 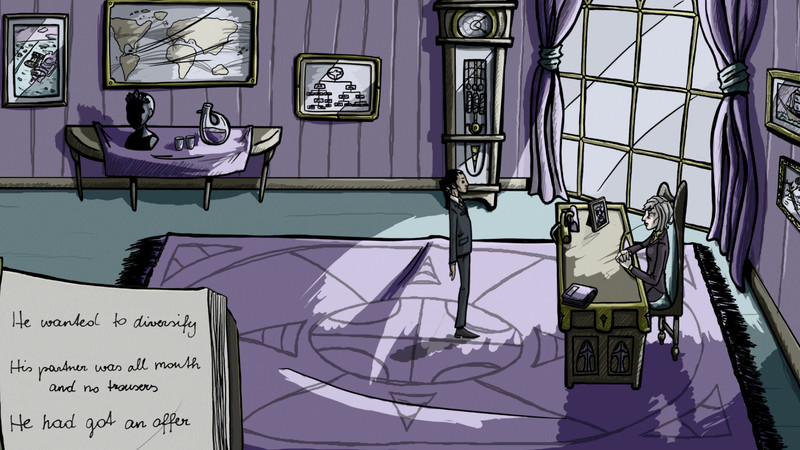 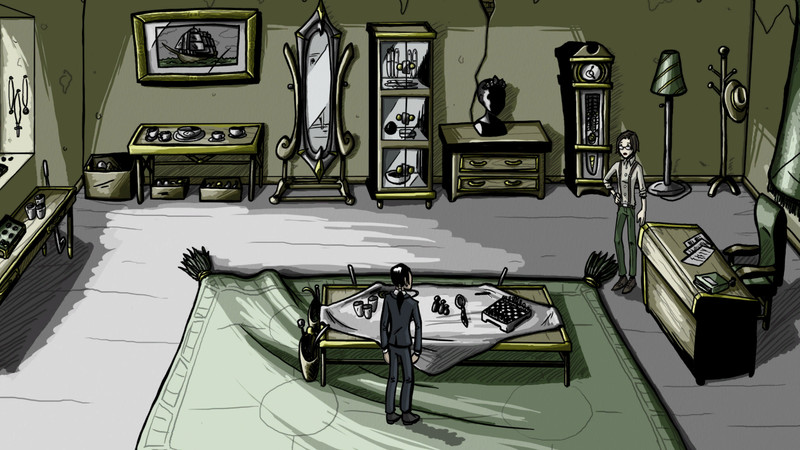 Confusing and disappointing.
The repetitive story line feels like a bug more than a narrative style.. The Shopkeeper sounded like an interesting little game for its price, but having played some of it I wish I had waited longer and read some of the user reviews. The game felt slightly broken, with scenes never really tying together correctly. You're merely dropped in with no explanation as to what's happening. Apart from that there was very little to do, and gameplay boiled down to an occasional clock clicking or skipping of dialogue that came up previously, which is far from the "point & click" gameplay they claimed to offer. While the art is nice the repetition of scenes wears thin very quickly. If you want to experience this game for the art style then just look at the screenshots above, as these were the only settings I encountered while playing through. All in all, I can't say I'd recommend this one. Worse still, with their comparison they have sullied the once proud name of Antiques Roadshow, which is frankly unforgivable.. Incredibly tedious if you want to get the achievements, incredibly short if you are just playing through. I got this in a bundle for a few pennies, and was bored after 10 minutes, but "played" for another 75 minutes trying to get the achievements.

If I could simply look at the items in the shop, it would make sense. But no, it had to be a visit to the mother in law every time. Perhaps this was intended to be how the stories were told, and the decisions on whether to buy or not, but it came off as poorly designed tediousness.<\/span><\/span>

For the achievements, in a bundle, ok maybe. But in all other cases, NO.. This game feels like its incredibly lazy or just very unfinished as though the developers didnt want to continue with the project so they took what little material they had and made it into this. It has poor design, boring storyline, and takes maybe 10 minutes to finish the story if you choose not to skip any dialogue. There is little to no value here.. The french have a way of thinking about art, they say "l'art pour l'art" - it's just art for arts sake.
Bear this in mind when enjoying this game,
Entrance yourself in the atmosphere of a small town, its antique shop, and the stories of the shopkeeper.
Use your imagination.
Try out different things not to WIN the game, but try to understand the characters, feel them and so on.
The atmosphere is a bit like Twin Peaks or an episode of Columbo.
A gem game.. I tried to write a review for this title a few days ago when I got it, and was unable to. I only wish Steam fixes this problem in the future so others can see the reviews of horrible games like this, before they pay for them.

Since it is too late for me, I want everyone else to know that this game is actually the worst I have ever played.

It is not a point and click adventure as the story goes on without your input.

The story doesn't have a clear end, as the man will always come back to the store, but seemingly for the first time, even if the layout is a bit different.

The stories told by the shopkeeper are also confusing. The main character of his story is obviously not the man in the shop, and yet the story seems to outline what will happen to the man upon returning to speak to his mother in law and looks exactly like the man in the shop.

Also nothing in the story the shopkeeper tells has anything to do with the actual artifact the man is asking about, or not asking about, depending on if you just let the game play itself or not.

In short: if this game were free, I would still not want it in my Steam library, because it would remind me of the time I wasted on it.. I found this one interesting, though it helps having a guide to get to the ending proper if you dont have the patience to trigger things through trial and error. It's very amatuer (voice acting is only passible, for example), but there are some neat ideas there. Three bucks is definitely a good price for it.. Keep in mind that this is not the sort of point&click game where you can move around freely (the game does that for you) plus there are no puzzles in a traditional sense. It's probably more like a short third person audiobook with very light interactive elements, where you are able to click on a couple of objects and dialogue choices, but except for that the game dictates everything else. If you're okay with that, you can expect interesting artwork and a very nice and dark comedy, that can actually get you thinking!. Usually I don\u2019t refund games when they are bad, only when they are broken or don\u2019t work properly (anymore). In this case I did it even when I didn\u2019t pay much during the winter sale.
The Shopkeeper has a neat premise but the execution is horrible. There is not much here but the repetition of the same sequences of three screens with the same short and uninspired lines of dialogue. The gameplay consists of nothing than clicking some random objects, listening to the same repetitive dialogues and waiting for some random achievements to pop up. There\u2019s neither an enjoyable game nor any meaning or engaging story to witness here. It starts boring and continues being it with no hope for getting something out of the experience, as the game pretty much goes on on its own with the player only clicking randomly on the screen.

Furthermore, the game mechanics just don\u2019t work in the way they seem to be meant. They won\u2019t be explained in any way and therefore you are thrown into the game without anything useful to do and trying to figure out, what there is to do. Unfortunately, there IS nothing to do, really.
On top of that, the dialogues are dreadfully written and the voice acting is not very good. Also there are no subtitles which would be very useful. (Note for these las sentences that I am not a native English speaker and therefore have a blurry look on this topic).

The art style is neat but gets wasted in the three screens that come over and over again. So the art style gets boring very fast and very undeserved.

It is a shame to give this game a bad review seen what it could be, that it looks relatively good and that the premises gameplay and story wise are interesting. But as bad as the execution is, it is needed.
Get this game in case you feel lucky or very intrigued. There are people who seemed to enjoy it very much. And in case you won\u2019t like it, you can always refund it.
. I bought it straight away because it was recommended by the 'choices and consequences' curator. While said choices are indeed present in the game, I failed to see any logic in how your actions affected the outcome of the game. Yes, you get to click a bunch of antique stuff and hear the snippets of the item's story, then you have some dialogue choices. But what good is the choice if its concequence is completely random and unrelated? Don't get me wrong, it's not like the concequence is so surprising that you can't even see how exactly you got to it. It's just that the concequence doesn't make any sense or have any relation to the choice you made so you start to wonder if your decision making even mattered. That's what annoyed me the most and that's why I regretted spending any amount of money on this game. Also, the structure of the game is very bizarre. I couldn't figure out exactly at what point one playthrough ended and the next one started because the game starts anew automatically. Maybe I'm just too dumb but I still think game developers should've done a better job of marking the beginning of each playthrough and overall explaining\u2665\u2665\u2665\u2665\u2665\u2665to the player. This particular player felt frustrated and annoyed by the lack of logic or at least the explanation of what's going on. Dislike.