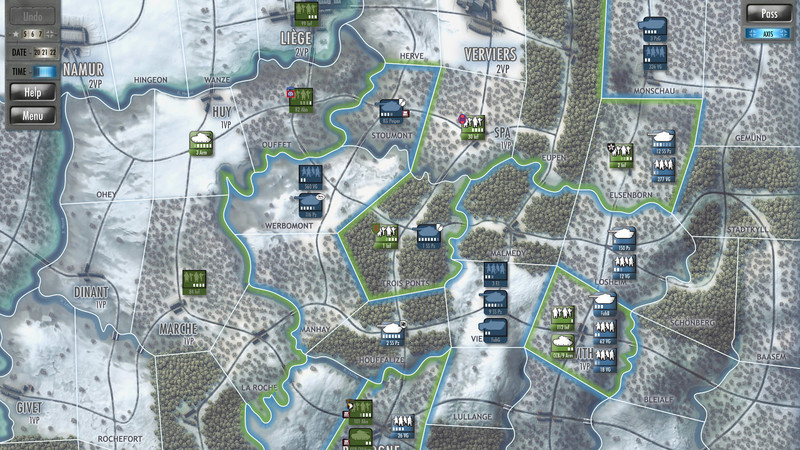 Set during what the historian Antony Beevor called "Hitler's Last Gamble", Battle of the Bulge provides an immersive experience on a tactical/operational level, putting the player in command of the Allies or the German forces fighting each other in several scenarios in one of the most brutal and wild environments of Western Europe: the snow-covered forest of the Ardennes!

Command infantry, mechanized and armoured units in hard fights through the various phases of the offensive, taking into account the nature of the terrain and its effects on the assailants and defenders.

You don't only have to face a direct military confrontation, you have to learn how to manage your supply routes, being careful not to rely on easy solutions! A quick breakthrough into enemy lines could lead your units being isolated with a high risk of being outflanked by enemy counterattacks!

Time will be another factor not to underestimate. In Battle of the Bulge, scenarios have a time limit with several "semi-historical" events affecting your conduct of operations in different ways.

Take control of iconic elite units on both sides, such as the 101 Airborne Division or the Kampf Gruppe Peiper, and replace the losses on the hottest spots of the frontline!

Challenge Bradley, Dietrich, von Rundstedt and other historical commanders with an ad hoc re-written AI -each with different play styles to choose!

Alternatively try to outsmart your friends - whatever their favourite gaming platform - in simple multiplayer encounters or test your skills with the new Tournament feature, providing infinite replay value to the game!

New Features from the 2015 version 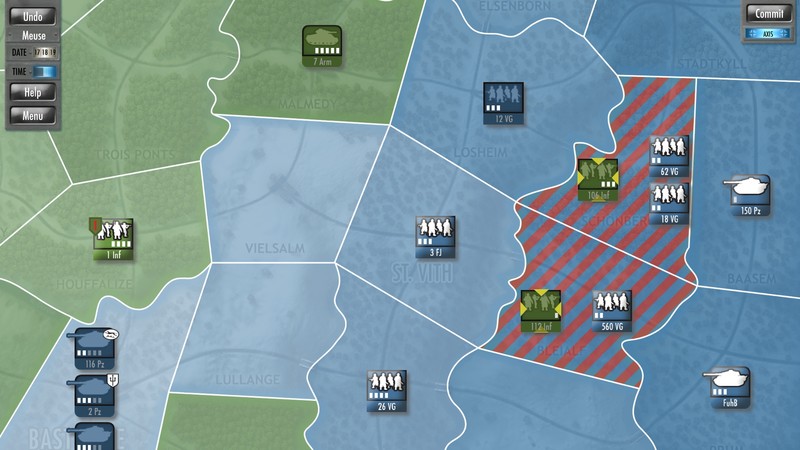 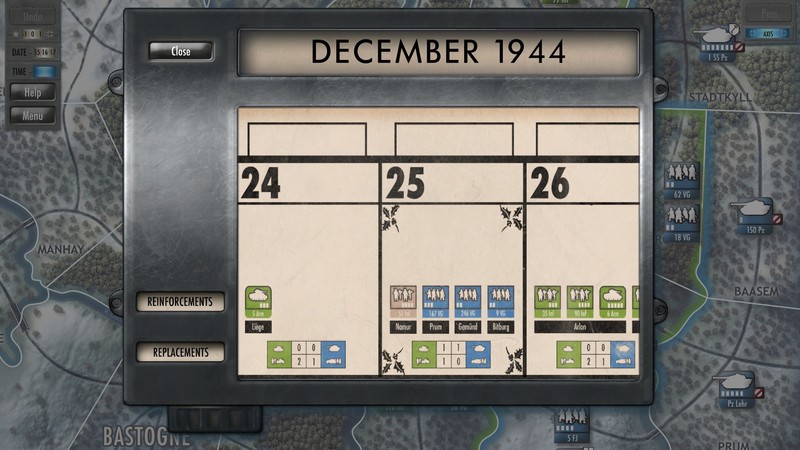 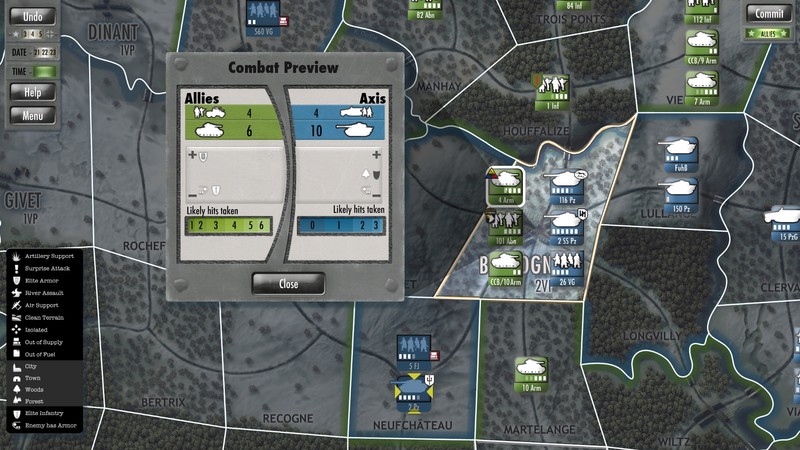 
Three types of units: Armor, foot infantry, motorized infantry. Map is divided into sectors, only one of which can be active at a time, thus limiting your tactical options. AI is superb fighting along the front, but is subsceptible to flanking along the southern border. Not a true wargame in my mind due to the "artificial" constraints on movement; seems more like a chess-type game where you can move three chess pieces at once. Still, a challenging puzzle for the price and one which can give you a few hours of fun (and frustration). Replay value is low.. Not an awfully bad game, but too limited in my opinion.
- only three unit types
- pincer moves are not possible, since you can only "activate" one sector at a time;
- flanking movements are pretty useless, since enemies don't care about being threatened from the rear or flanks, unless a supply line is in danger
- tactical retreats are not possible; once in a contested sector, you are forced to duke it out, sometimes for several turns on end, so your units could be stuck there for the rest of the game
- strict time limit, no possibility to switch off the timer that ends the game

- they say the A.I. is smart, but I cannot confirm that beyond doubt;

When playing the Allies, the A.I. set up a good defense, but when I shifted sides and let the A.I. play the attacking Germans, it didn't go all that well. The German A.I. started off good, but once I blocked every possible route of advance, the A.I. didn't know what to do anymore. It started moving around units without purpose, moving them to one place and then moving them back again. At first it seemed like some sort of a plan to prepare a breakthrough, but nothing like that happened. I waited for an attack to happen, passing every turn to him, but the A.I. wouldn't engage, wouldn't attack anymore, and kept shifting units up and down the line without any apparent plan or idea what to do. After minutes of fooling around, the game finally crashed, saving the A.I. a humiliating defeat.

- It also looks like they made the Bastogne sector A.I. especially resilient against german attacks; no matter how overwhelming the odds, somehow the attacking Germans in the Bastogne sector always seem to miss their targets, making the defenders turn out extremely tough. "American heroism" is probably the best explanation for this phenomenon.

there are some positive points, like nice graphics, easy-to-understand game mechanics, and effective menus, but still not enough to really recommend this game. well, i m still only into the second day of the campaign but so far i d say this game is excellent.
clear tutorial, simple but good game mechanics, clear interface, nice graphics, fun and thought provoking gameplay.

i particularly like the fact that you can only move units from one region only per turn. means you have to think very carefully about your priorities.

also, the full campaign has an option for initial random distribution of units thus adding to replay value.

its early days but so far i d give this game full marks.. I've had a great time playing it against a friend. It's a cool little game. The design is pretty slick and elegant, nothing fancy.. It would be nice if there was a way to acknowledge the victory notification and then go back and review the map and units. As I see it now, it preety much locks down the game and I can only go to "main menu".

Otherwise, this game is well worth the money. The system works pretty well. I will play against the comuter, or solitaire, using the hot seat option.

I would love to see the old "Ardennes Offensive" computer game on Steam, but given that is not available, BoTB is good option.. Wow, nice deep beer and pretzels game! Hope I see more of these games.. Very good game. What I like is the simplicity. You can play this game immediately and have a good game with the AI wrapped up in 30-60 minutes. The real enjoyment is verus other players and PBM. It is a cross of chess and a traditional board wargame. The game is well balanced and both sides will be on offense and defense for roughly half the game. You do need to know the nuances of the rules but they are not overly complex. I hate when I play games that are about say Operation Barbarosa and you have to get down to the detail of how many tires need to be ordered for your motorized units...if you take my meaning. This game does not have that detail. Your big issues will be guessing the enemy's next move, concentrating your forces for offensive action and sometimes trying to withdraw from sticky situations. Offense and defense both take skill and preplanning. This is because once your forces are committed and engaged it gets hard to unengage and redirect. I feel this is historically accurate.

My only mild dislike is the combat system which often produces insane results on the extremes. A small single point unit holds off an entire Panzer Corps or Armored Corps. While smaller units can delay they could never stop such an attack especially for a day or two. However, the luck tends to average out and it is not usually completely determinative. Things absolutely will go wrong or against you at times but I feel that is accurate, too within a certain range. Combat never ever goes like your initial plan, at least not for long.

I give this game a top rating as for me it is the best kind of game to play. Virtually 100% of your time is spent on moving and playing and not game management. You will stare at the map considering your next move carefully as the sequence of your moves is as important as the tactical plan itself, much like chess.. This game was bundled with Drive on Moscow for a total price of 14.99 both games use the same engine, and are good operational games that reflect the historical situations while not being to overly detailed. Good Beer & Pretzel games particularly well suited to pbem or hotseat play. Bulge can be played in no more then 1 hour for the opening scenario and even the whole campaign can be done in an evening.