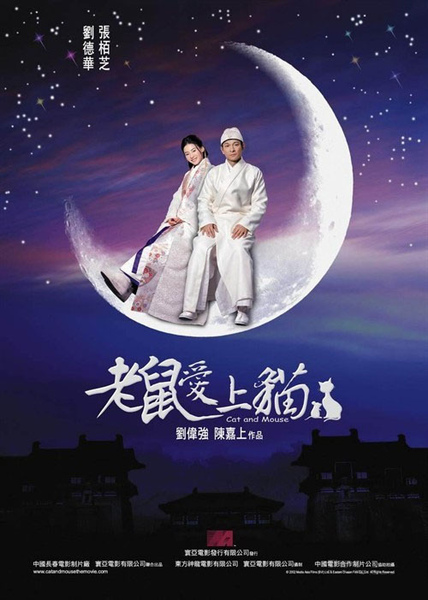 I had relatively high expectations of Cat And Mouse, being a big fan of Cecilia Cheung, and while it wasn't a terribly good movie, it did have some nice performances, and Cecilia sure enough was cute (and that's even though she spent the first half of the movie wearing a totally unconvincing beard!). It was entertaining and pleasant enough, but not as good as I had hoped. I wanted more action, more kung fu, and more story. It was a comedy, and while Hong Kong comedies are traditionally light on story, this one was definitely not as bad as many others. Except for a few rather silly jokes, there was nothing offensive or disgusting in this movie; it was mainly a mainstream showcase for two of Hong Kong's most attractive stars.

For a Cecilia Cheung fan, it is a very worthwhile movie. Not only does it feature plentiful close-up shots of her delectable face, it also gives her a good character and some good (though perhaps a bit too romantic) scenes to work with. Despite the light-hearted material, she does manage to demonstrate some considerable acting skill, which is the thing that best serves to recommend the movie.

6 out of 10. This movie a lot of fun, and all the actors have great chemistry together. It's a very sweet and charming movie. The plot has Zhan (Andy Lau), a well known court officer, going on vacation, where he meets Bai (Cecilia Cheung), and where he finds out about an assassination plot against Judge Bao (Anthony Wong), who's an important person. There are a few more plot elements that come around but that's the basic setup for the movie.

This movie has very good people behind it. The co-writer is Felix Chong, who won a Hong Kong Film Award for his work on Infernal Affairs. The producer/co-cinematographer (odd combination, but, yes, that's what it is) is Andrew Lau (The Storm Riders, The Wesley's Mysterious File) and luckily he's on the spiky ball this time (he's done some bad movies before). You also have Gordon Chan as director (Fist of Legend anyone?). Then you have the three actors mentioned above and a great supporting cast. So all around, people know what they're doing. Nobody messes up either, and that helps a lot.

The only real problem I have with this movie is the speech at the end. This was either put in to pacify the government or asked to be put in by the government. It's basically a brief communist speech given by the Emperor to the people. It shouldn't have been put in there. There's really no setup for it during the movie and it sort of comes out of nowhere (...sort of...). Considering where the movie came from, I guess I can let it go.

This is nothing very heavy. It's light and funny and entertaining. The leads are very good and have great chemistry together. Andy Lau and Cecilia Cheung are very charming whenever they're on screen. Anthony Wong and the rest of the cast seem to be having so much fun doing this movie as well. The movie doesn't break new ground but that doesn't matter, it doesn't try to. It just wants to entertain, and that's what it does very well. 4/5