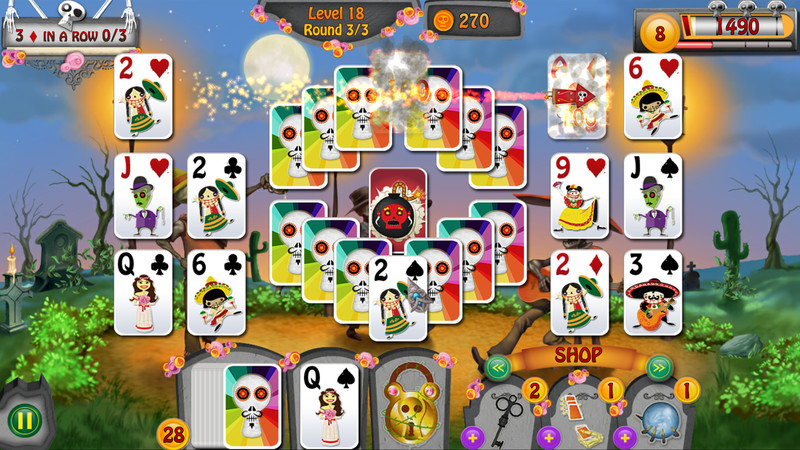 There is an old legend in Mexico that on “Dia de los Muertos” the Day of the Dead, the gates of heaven will open and the souls of our loved ones can visit the land of the living. That’s where the story of Manuel and Maria begins. An evil soul has kidnapped Maria. And now Manuel asks for your help to join him in this incredible adventure through the land of the dead after his beloved bride. Journey through beautiful scenery, relaxing music and help funny characters to find their belongings. Prove your skills in this challenging solitaire game!

What people say about Forgotten Tales


What a fantastic solitaire game, it even has a fantastic story to go along with it.
I loved the features, the graphics, and the Solitaire game, but most of all, it has a very interesting story, enjoy! - pennmom36, Big Fish Games

I love this solitaire game! It’s colorful, the characters are funny the story line is cute. It’s different than most of the other solitaire games which can get repetitive and therefore boring. I would recommend this game. - Mernon54, Big Fish Games 1075eedd30 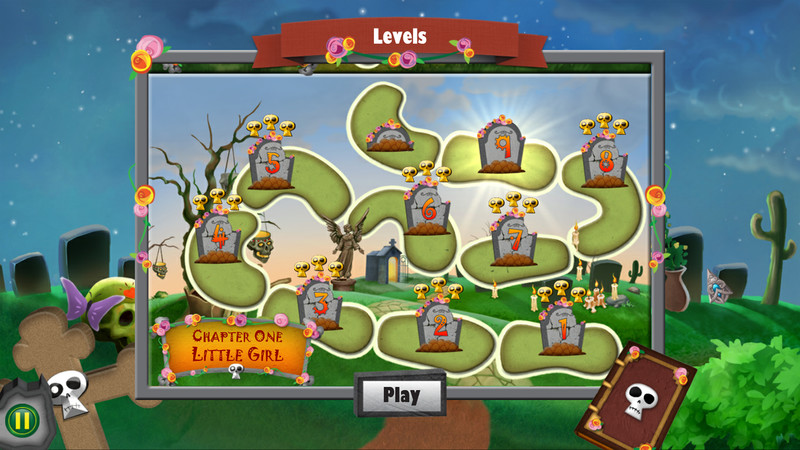 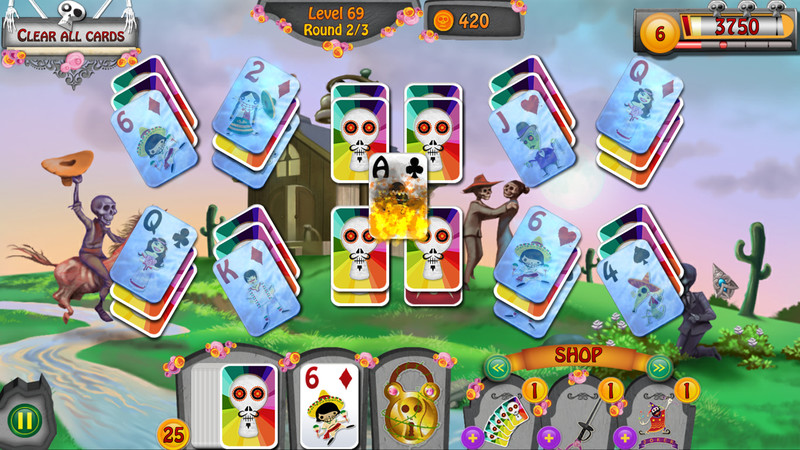 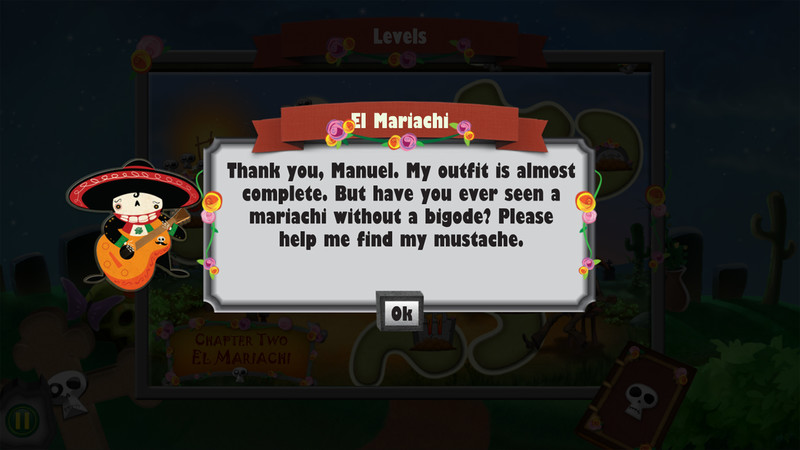 
How many times does this game have to be made. Nobody seems to be able to have an original thought and most just seem to keep rehashing whats already been.. The story, or almost lack thereof -- you meet one of the dead, he needs an item, you get that item a few hands later, repeat x3, repeat x10 -- is totally in no way tied to mechanics, unlike in many other solitaire quest type games. Gathering the (huge bunch of) potion ingredients is, too. This is just a filler you get at the end of some of the hands which would have otherwise had nothing at all, because each level has 10 hands, and only 3 "lack-of-the-story" items.

You really would have a hard time noticing there even IS a story if some of the pop-ups were not unskippable.

The classic solitaire formula is given a 'day of the dead' theme but the mechanics fail to sync up with the narrative resulting in an unfortunate dissonance for players.. It took me a bit of playing to figure out was this game was really all about. It's a non-random solitaire games with several goals for each level, and a story that's told by progressing through Chapters (a Chapter is just a group of 10 levels).

The game starts off with a layout. You need to clear three different layouts to finish a level. You can purchase power-ups at any time to accomplish this. The power-ups quickly unlock so that you can purchase them, so they are not all available for purchase at the start. It follows the rules of building up or down on the deck. When the current layout is finished, the next layout appears, and you can keep building on the deck without drawing a new card, if possible. You are limited by the number of cards in the deck, though, one of the power-ups allows purchasing more cards.

Now back up a second ... not random? What on earth does that mean? Well, here's the way it seems to work. You start off with a card that usually has cards on the boards playable on top of it. Not a big deal. However, when you draw a card, there is approximately a 3 in 4 chance that it has playable cards on the board for it. The 1 of 4 chance is just a wasted card. So, that makes it easier, right? Well, yes, it does. So where is the challenge?

The challenge comes from meeting the goals (required). For example, "Play 8 cards in a row, no spades." You can use power-ups, and that helps a lot. The real challenge is getting 3 gold skulls on each level. You need a certain number of points to get there, and there is a meter in the upper right indicating how many skulls you will get. It comes down to the wire for this.

The game has great art, a decent theme, interesting goals, and a different playing style. Always play for three gold skulls, and there is lots of fun to be had.. *EDIT for fairness* I'd give this a thumbs sideways after completing it.<\/b>
Finished it for achievements, around lvl 40 it kind of picks up, so if you can treat it as a tutorial till you reach that point it kind of gets better. Last 15 lvls can be a little grindy, which I didn't mind as it gave me a reason to use the nice power-ups and think ahead. Also I was wrong in my original review...or playing with my volume down, I really enjoyed the soundtrack, the cards I still don't really like but the backgrounds are nice.

Original review with some amendments in brackets
Cards are not random, am I going to win, yes I am, every level, always.<\/span> (except the last 15 levels) Last card on the board is a 2, I draw a 6, I'm actually surprised but I know without a doubt the next card is an Ace or a 3. Next card is a 3, yay go me. This is true of every round by the way. The only game like this I've played where I end a turn and there was a shot left that I missed but I don't bother using the undo button because I don't have to, I'm going to win anyway. (except the last 15 levels) I just shrug and carry on. All power ups are subsequently rendered useless. (till the last 15 levels XD)
It's a shame, because it really could have been interesting and fun and it should have been, but it's not, it's dull and it's repetitive and it's pointless. (till lvl 40 odd)
If there's a reason for the pointless level design, like another reviewer, who was also disappointed, suggested, it's not good enough, they should have got rid of the reason it needed to be designed that way so they could have made an actual game.
Will I finish it because achievements, yes I will. Will I hate myself for it yes I will (but not as much as I thought I would). Do I recommend it no I don't.<\/span> (meh, if you absolutely love this type of game and really want a new one, go for it.)
There's loads of good ones in this genre including Avalon 2 with city building and resource collecting and a really nice soundtrack and art work. Solitairica with class decks, mobs and an end boss to fight each card drawn and played is useful to you, nice humour, great difficulty curve. Regency with a nice story and nice power-ups and great artwork to name a few (You can pick all 3 of those up in a bundle with this one btw). All of these have good card and impact and combo sounds and nice animations. Day of the dead has none of these and the card artwork is so in your face the only difficulty is trying to see by it so you can take in all the cards.
I can't comment on it's soundtrack since I honestly can't remember what it sounds like, which may be comment enough I guess.<\/span>
Why is this tutorial to counting the same price as the games I mentioned above. (If they reduced the price to a couple of pounds below others of this type, I'd probably give it a thumbs up. It's not quite as awful as the first 40 levels would have you believe.). It's solitaire. I'll give it that. But there are so many better ones out there. This one feels like an early version for the computer, but upon review it came out in 2016. It controls sluggishly and the UI could be designed far better. For example, there are bomb cards where they'll explore the surrounding card. There is a good 1-2 second pause before the cards underneath flip over. There are firework style cards which will clear out the row. I have found multiple levels where they're pointing diagonally but when I click, they go straight. There have also been levels where there is clearly a card on top of another, but when I click to the next card, it tells me it is available.

The story has nothing to do with my thumb down review - you don't play these games for plot. However this one is worse than most.

I gave it a fair shot, but I'd recommend Avalon Legends or Regency Solitaire if you're looking for a quality game with good controls.. It's an alright game in it's genre. However, there are way too many powerups that let you breeze through the entire game very easily. Also, every 2nd card in the stack will be a playable card for your layout, so it kind of defeats the mystery. Still had a lot of fun with this one.. It's a nice and casual game.
Don't expect to be challenged to the limit, because it is not that difficult (untill now?)
It's like the card game "patience", with some extras.

Found some minor bug where the achievements don't show up in real-time. I had to restart the game to be able to see my achievements.