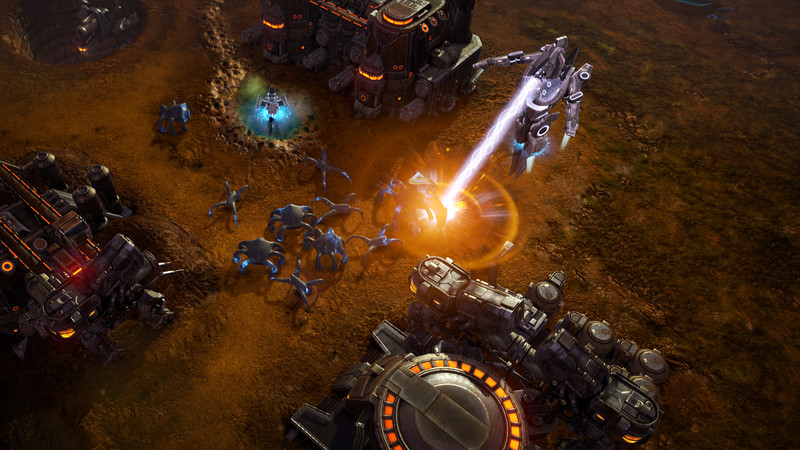 FIGHT THE CHAOS. OR HARNESS ITS POWER.


Out of the ashes of war, a tentative truce emerges between the Humans, Beta and the Goo—but peace doesn’t last long. Ecosystem Nine finds itself thrust into turmoil once again with the arrival of a destructive, alien life form known as the Shroud.

Grey Goo is a real-time strategy (RTS) game that combines classic strategy mechanics and a balanced combat system with an emphasis on large-scale decision-making. It puts you at the center of a tactical struggle for survival—and ultimately, control of Ecosystem 9.

Take on the single-player campaign to command three factions: the Humans, masters of defensive architecture; the Beta, a proud, versatile alien race; and the Goo, an enigmatic, highly mobile life form. Or compete with any of the four multiplayer factions—including the disruptive, unpredictable Shroud. 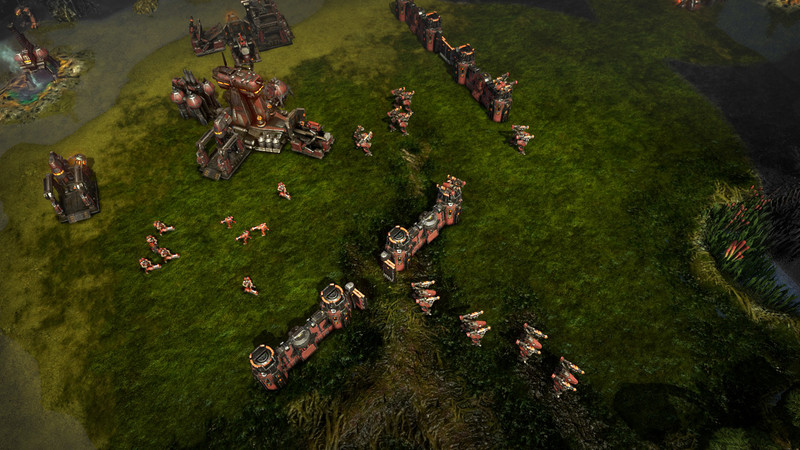 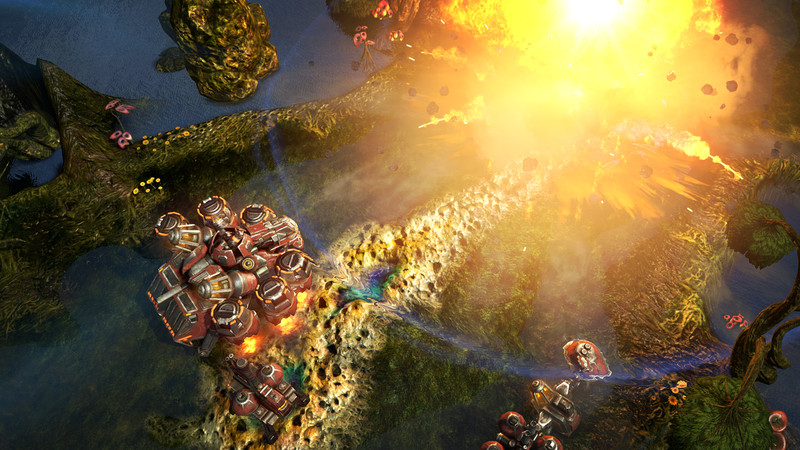 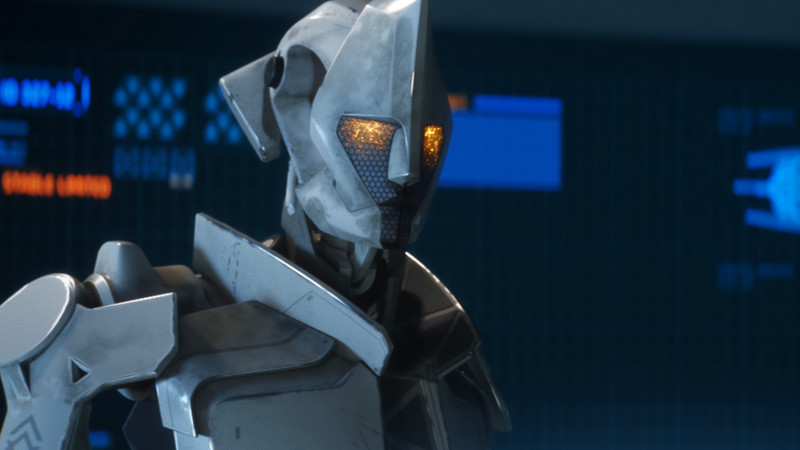 I only played through the single player campaign, but I found this to be an entertaining RTS game. It's not the best, but if you have an RTS itch that needs to be scratched, it will work.

There are 3 factions in Grey Goo: Humans, Beta, and Goo. The Humans and Beta are VERY similar to one another. The Goo are unlike anything I've seen in an RTS and therefore an interesting change. The story is fairly entertaining

+Graphics are nice
+Game is well optimized, except for saves (see below), and I didn't experience any bugs or crashes
+The Goo are so different, they require you to use very different tactics from the other 2 factions
+It seems the developer is still regularly releasing patches and updates
+The story is pretty decent
+The world on which the game takes place is very beautiful


-Human and Beta factions are very similar
-Not a very large variety of units
-The time it takes to save a game varies from 1 second to 1 minute. I have no idea why.
-The Goo can be frustrating to play, because they are so different from the other factions
-The tutorial isn't great, for example I had to look up how to build the human's elite unit. Grey Goo is a blander, kind of budget Starcraft. It has innovative base building and unit mechanics between it's three (initial) very diverse factions and much of the polish, too, with great CGI cinematics and a a raft of relatively 'hard' (i.e. plausible) sci-fi pretensions. But gameplay just lacks excitement somehow.

It has novelty, but in the context of obvious derivative echos: the aliens are junky, lower tech (like the Terrans), with South African sounding accents and are more sympathetic that the human faction, with a colder, clinical aesthetic, touting smoothly curved hovering units (echoing the Protos). Their structures need unbroken adjacent conduit connection to the core base building to operate, which is interestingly different.

The titular Goo would be the obvious Zerg swarm stand in. They're unique in having no base structures to build, all splitting off bigger mother blobs that harvest resources directly.

But as a core concept they're emblematic of the game's lack of pizazz. Fundamentally problematic to work with artistically: typically, the 'grey goo' concept involves out-of-control nano-bots that consume all matter around them, reducing entire planets to a mush of their replicas. Nightmarish and unstoppable.

But of course, to fit the RTS genre there needs to be units of some kind to click on and control. So the game goes half way and has undulating grey pancake things and specialised bug-eyed offspring for most offense unit that look kind of arbitrary and ridiculous. It all feels a little too naff, that they can't munch on trees and scenery, or even enemy units all the much, since the game has to be somewhat balanced and playable.

The story ark was ok, but predictable and uninspiring for me as a hard sci-fi aficionado. They make use of a fair bit of real world terminology (e.g. Von Neumann probes, etc), as well as genre tropes, which is cool to get it out there, but kind of trite.

I can't comment on multi-player, which I didn't really try, with no friends owning the game to play with and little enthusiasm after the single player.

By the time I'd completed the main campaign and Emergence DLC I was just glad I'd made it to the end! I struggled a lot with the final missions, not really in a fun way. Although they were presumably meant to crescendo, I had to check out multiple YouTube videos, use save games prodigiously and really take a lot of time sitting around to make sure my Goo forces were built up to max strength before attacking, etc.

Overall, if you're an RTS fan then you could do worst than grabbing this while it's on sale. Far more artistic value than Ashes of the Singularity, for example, and slightly better money's worth, with an extra DLC mission and forth faction added on for free earlier this year. So, check it out, why not. :-). This is by far one of the best RTS games I've played since SC2 released. The developer brought back a lot of the finesse and strategy that the old C&C games had, and brought that into the modern day with a lot of cool QoL changes, and gameplay features. I have memorable moments just by going against the AI that I simply couldn't have in other games. Not to mention, the soundtrack in this game is phenomenal.

Pros:
-Graphics; a solid 9/10
-Audio; from unit sounds to soundtrack the audio is amazing.
-Controls; similar to League, but the default hotkeys make things super quick and simple to build from afar.
-Presentation; the SP is well presented, the story interesting, and pacing is well done. Not to mention BEAUTIFUL CGI.
-Ships with a map editor!

Cons:
-Slight balance issues.
-Needs more tutorials in my opinion.
-FPS issues on 2v2 maps occasionally.
-No replays, or commentator functions in multiplayer.. I am seeing a lot of Negative reviews for this game lately, and I just don't see it. I was on the fence about this game for a long time, but finally picked it up and I have loved every minute of it so far. The campiagn is beautifully done with amazingly animated and voice acted cutscenes with a very intriguing story.

If you enjoyed the old style RTS games, and you enjoy a good Sci-Fi story; you will love this game.. This is a refreshing addition to the RTS genre. This game has already become one of my all time favorite RTSs and I can see myself playing it for a long time. Worth every penny. I highly recommend it.. This game is a well developed asymmetric RTS game, featuring 3 vastly different factions.

The humans are network based, all the constructs are linked and the game-play is heavily advantagous for those who prefer the turtle approach thanks to the turrets and the compact design their playstyle promotes. They are also the only faction capable of teleporting 6 units at once to any spot on the map where you have visibility allowing you to quickly reinforce troops if needed. Their elite unit sends a laser beem straight forward in a line, damaging any enemy ground unit (imho. this is the weakest elite unit, but they have air-superiority anyways thanks to their airplanes and how small their storages for the airplanes are).

On the completely opposite side this this is the Goo, the playstyle of the goo focuses on aggressive hit-and-run tactics, their elite unit can cause serious havoc and is also able to climb any obstacle and destroy enemy buildings and units by simply being around them. They are very strong if coming in a pack and when lacking form they can devour an entire base by simply being there. That said, their forms (units) do have a lot of advantages such as range, ability to target airplanes and pure damage.
The goo has no structures, they are a fluid faction in every meaning of the word.

The Beta are most normal of the factions, specifically said by the Devs to be intentionally so for new players to get used to the game, but they are still very strong and definitively a force to be reckoned with. Their elite unit is a walking production facility that sends out miniature nuclear bombs and is able to attack any close-range enemies by having units mounted ontop of it. This is one of the big strengths of the Beta, some of your units can mount walls and the elite unit, allowing you to create a strong permimiter that is very hard to break through.
If you then decide to go on the offensive, the elite unit will help you take down most resistance, having what is probably the strongest of the elite units in the game.

As for the campaign, it is very well made, although, it is a bit short, allowing you to get used to each of the factions while also deliviring a great story that they have confirmed will be expanded.
Note: It will come through DLC.

Now, on a more negative note, while humans are strong, they often feel unflexible as you might not be able to expand anywhere due to it not always going so well building uphil and some areas are just blocked off for building. For the Beta, that just means you place it somewhere else, for humans, it means stop.

Also, the game, at least so far, allows for only up to 4 players, meaning you can't even have a 3v3 with one of each faction on each side.. It's refreshing to see an RTS that finally goes back to the genre's roots as well as adding interesting mechanics that feel right. The base building mechanics, units, and technologies for each race are completely unique but gameplay still feels balanced. As a huge fan of the classic C&C's, it's awesome that the soundtrack is composed by the man himself Frank Klepacki. Not only that but having former talent from Westwood working on this game, you really can't go wrong.