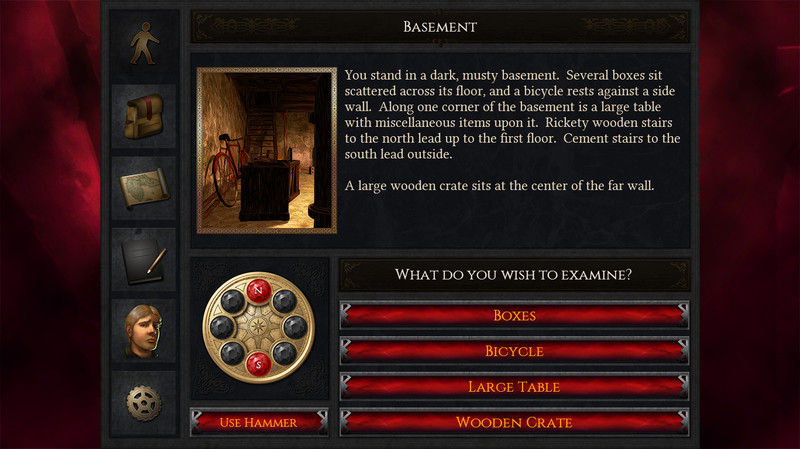 Lifestream is a haunting tribute to the classic text adventure that plunges players into the roles of Randolph and John Holton, a father and son desperate for answers to the mysteries surrounding a mysterious realm and an enigmatic brotherhood.

Lifestream is a modern "blast from the past" that combines the best elements of interactive fiction, visual novels, and gamebooks with a graphic user interface that emulates the look of early 1990s text adventures. It features beautiful artwork and cinematic music. In place of a text parser is a context-specific multiple choice menu. A compass allows you to travel from room to room, and separate inventory, map, journal, and character screens are available at the push of a button.

Lifestream plays like an interactive novel. You make a series of choices that determine what happens next in the story. But unlike traditional gamebooks and choose-your-own adventures, Lifestream also features more advanced adventure game mechanics, including locations to explore, items to collect and use, characters to meet and interact with, and puzzles to solve.

"Father Randolph Holton was dead. Not literally, of course. But in his heart, he knew he could not live on...not after everything he had learned. Sitting at his dark oak desk in the corner of the dimly lit, cozy study, the white-haired, frail Catholic priest--even frailer of late--dipped an old quill into a container of jet-black ink and began to write..."

John Holton's father, a Catholic priest named Randolph, has been missing for two weeks. Unable to go to the police for help, since doing so would tarnish his father's reputation as a celibate priest, John takes it upon himself to search for his father.

Over the course of Lifestream, players take on the roles of both John in the present and his father, Randolph, in the past. While John searches for answers, players see the troubling events that led to Randolph's disappearance firsthand. 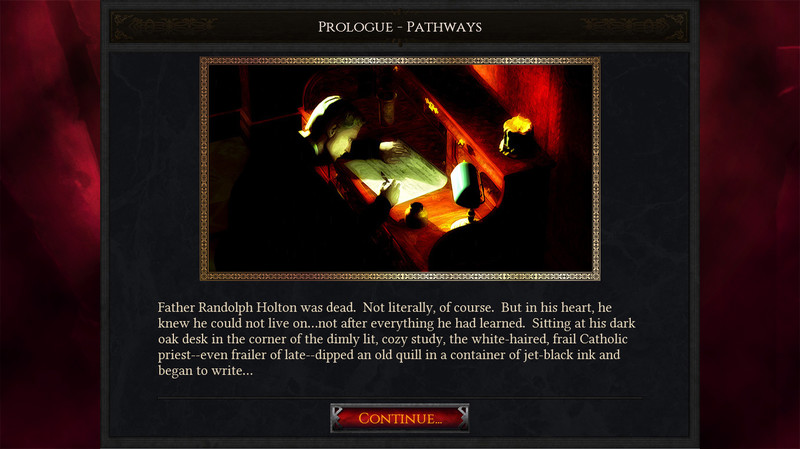 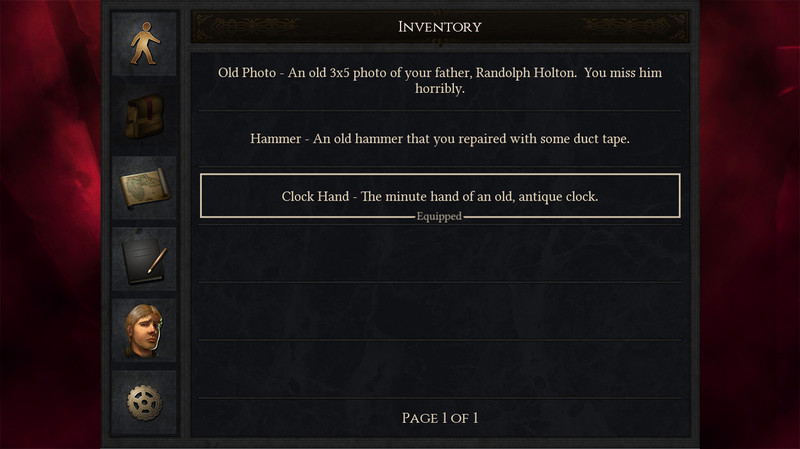 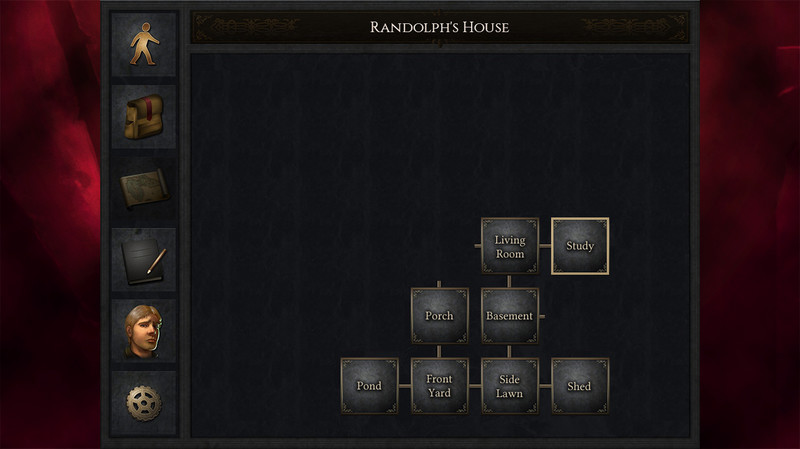 Positives:
+ GUI-driven text adventure like the mid 90's
+ Very nice artwork (it's not HD, but it's in a style more like the 90's adventures)
+ Detailed story
+ About 8 hours of game play
+ Cost only a few bucks, less if on discount

Negatives:
- Takes an hour to start getting into the plot (I almost gave up), you do much day-to-day priestly stuff without a clear plot hook
- Some aspects of the characters backgounds are confusing at start

Neutrals:
-\/+ The GUI means that you can only chose from certain actions, unlike a true text adventure where you can type anything into the parser (this makes it less frustrating to play but you miss some of the fun)
-\/+ You play as either a (presumably Catholic) priest or his son (who his incognito and claims to be his nephew)
-\/+ Some of the storyline choices you have to do are a bit far-fetched (which is why this style of game works better for fantasy worlds than a real-life setting)
-\/+ A few timed puzzles (not sure if it affects the final outcome)
-\/+ Much of the dialog choices don't seem to affect the final outcome
-\/+ Apparently a remake of a game from 2003. Wow. What can i say. I didn`t expect that much from the game, but it totally flashed me.
This game is a text adventure where you have to solve puzzles in order to continue. The interface is great and i also enjoy the music in the background. The tutorial is short and there are no enerving long explanations. It`s all pretty simple. But i definitely like the mechanichs.
Well, i haven`t played long now, but i`m already excited to continue.. This is the second text-adventure I played on Steam (the other one from a different developer), but the plot in this one completely sucked me in.

The game tells a supernatural story about a son investigating his father's disappearance, with each chapter switching between son and father, present and past perspectives. The story starts slow, but the mystery and suspense gradually build up, culminating in a completely unexpected ending.

I definitely recommend this to anyone who enjoys reading and likes adventure\/detective games.

Now I am going to check out the other text-adventures of this developer, hoping they will be as good as this one.. I am surprised that there are so few reviews for this VG text hybrid adventure game (mostly visual novel). For achievement hunters it\u2019s a really good game to get 100% on and in one playthrough!

I am used to other type of VNs on steam which requires tons of playthroughs to get every weird combination for achievements, thankfully not here. If you look at the achievements first they are very easy to figure out in game, for a couple you do have to find in game clues first before triggering said activity to be able to get them.

I haven\u2019t played the original lifestream, but this ended up being really engaging with not only the story but with traditional aspects of point n click adventure gaming re using items in inventory and reading journal\/items you pick up for clues. Also in remembering when you are moving to different places what is at each place, so you can go back to it later (there is a map which helps but it\u2019s not a transporter map.)

There are two different modes of play \u2013 easy and normal. So you can have the option of help -objectives, hints and even a tutorial or none at all which should please everyone. There is even a w\/t which the devs have posted in forum if you get stuck at any part.

It does take a while to get used to how everything works and while most things you get the hang of things quickly, using inventory items is a bit awkward. Sometimes I didn\u2019t think I could use an item only to realise I wasn\u2019t at the exact text page it wanted me to be at.

If you only like straight text games and hate adventure games then I would suggest you try the demo for this which I saw at the publisher\u2019s website as it may just surprise you!

Now I am used to the interface, I much prefer this style of game compared to straight VNs and being an adventure player I enjoy the journal\/inventory side and trying to get max points like old school type adventure games. Thankfully you don\u2019t have to get max points for achievement purposes!

I think I picked this game up in a bundle but at such a low price I\u2019d have been very happy paying full price, with trading cards, achievements, good engaging story, decent length, I am happy to recommend this game.

Can\u2019t wait for Shady brook to be greenlighted as I\u2019ll be buying that.. With a semi cheesy story that never winks and nods about it, it manages to charm you even with its semi ugly 3D stills. Combine that with a solid interface and an actual ending with no sequel hook nonsense like a lot of recent indie titles, I can recommend this.


Kilmonger is coming:
April 26 the long-awaited mystical novel Kilmonger from the creators of the acclaimed Crystal City will release.

Villains, demons, violence and sex only emphasize and set off the main thing - this story is about love and good. Guide the heroes through darkness and horror to the perfect bright and kind ending.

Add the game to your wish list, do not miss the start of sales! 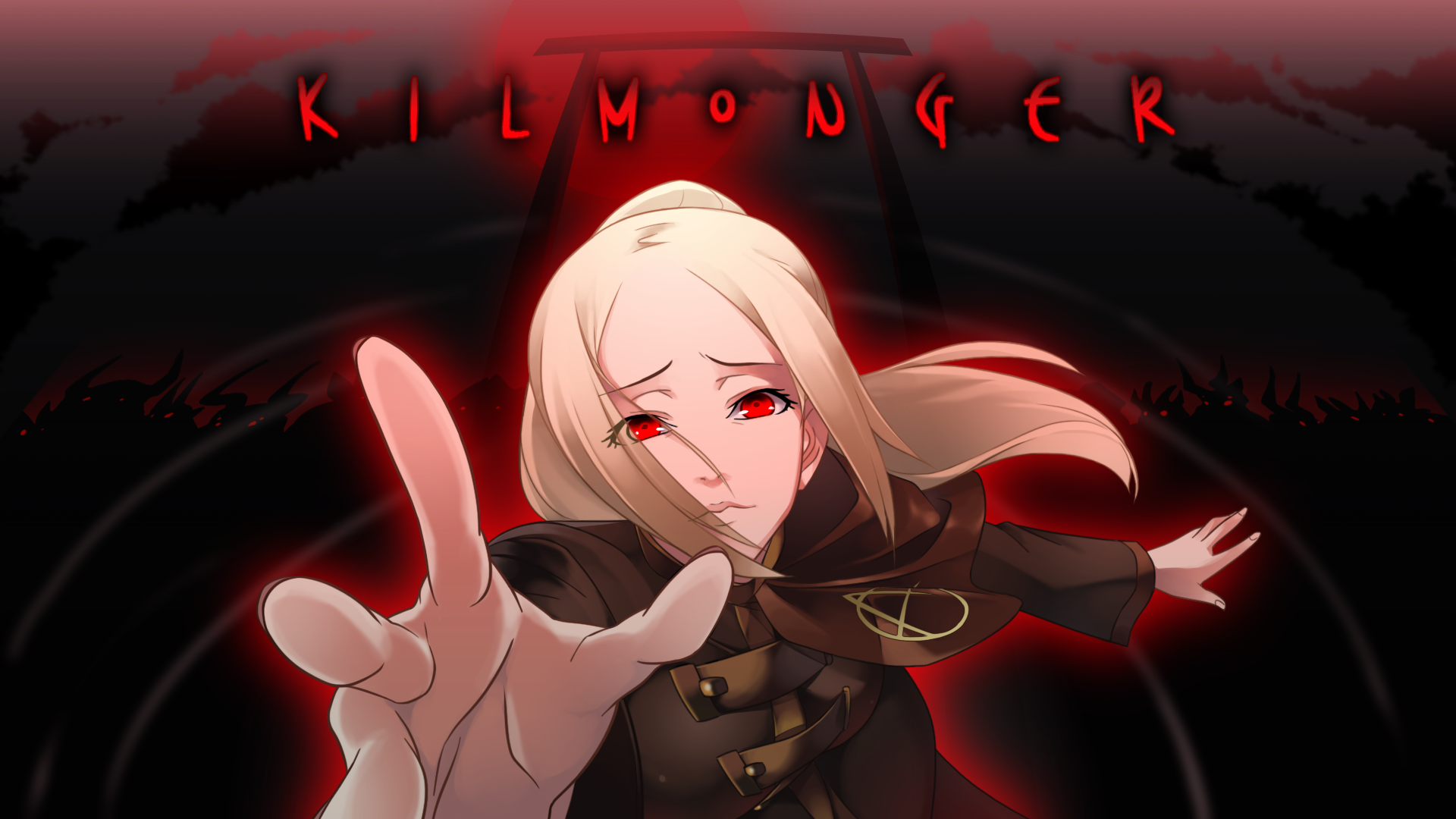 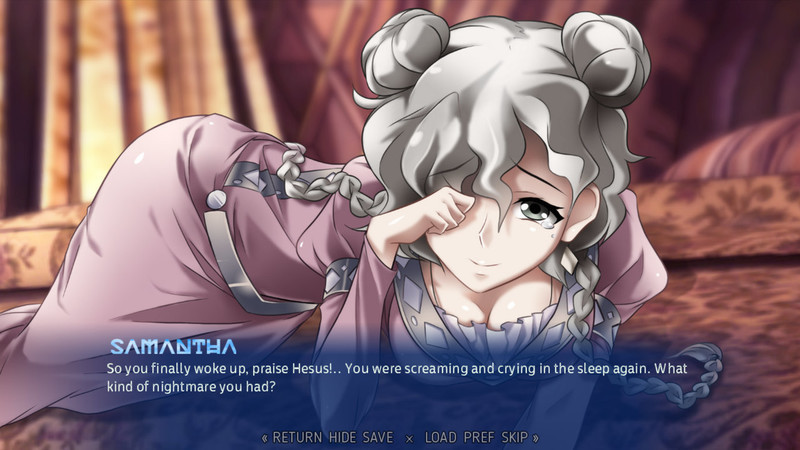 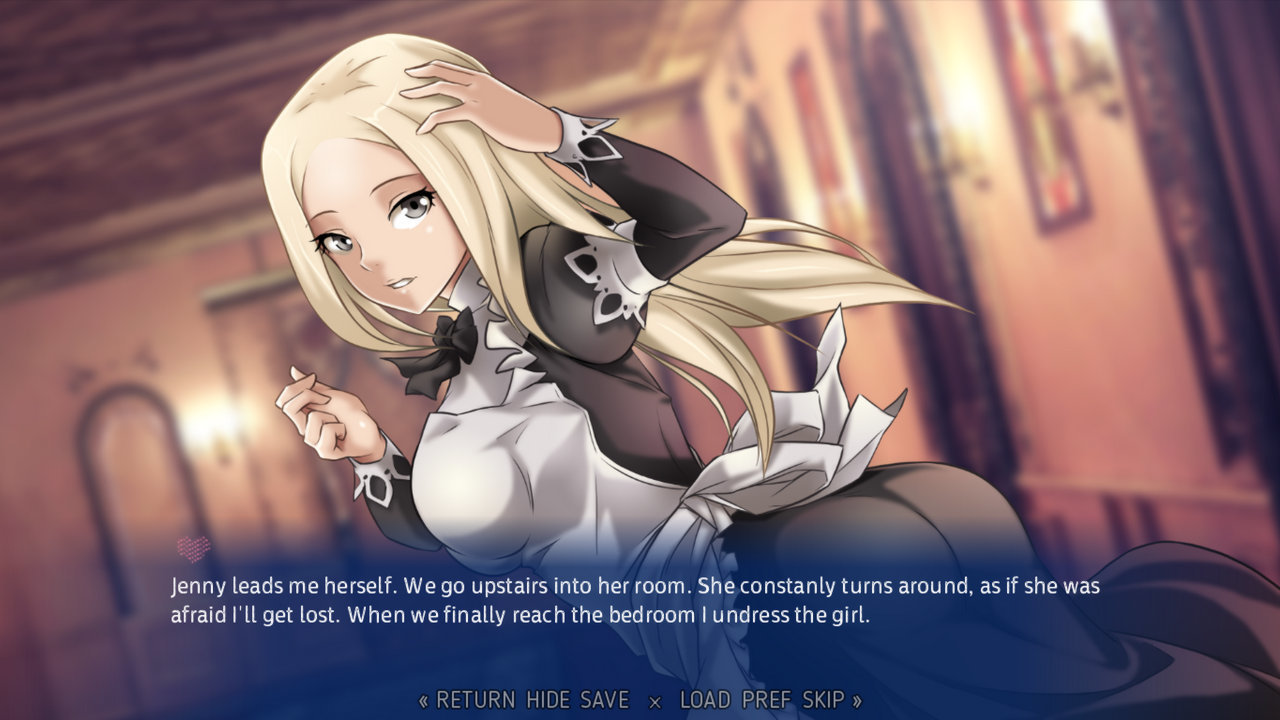 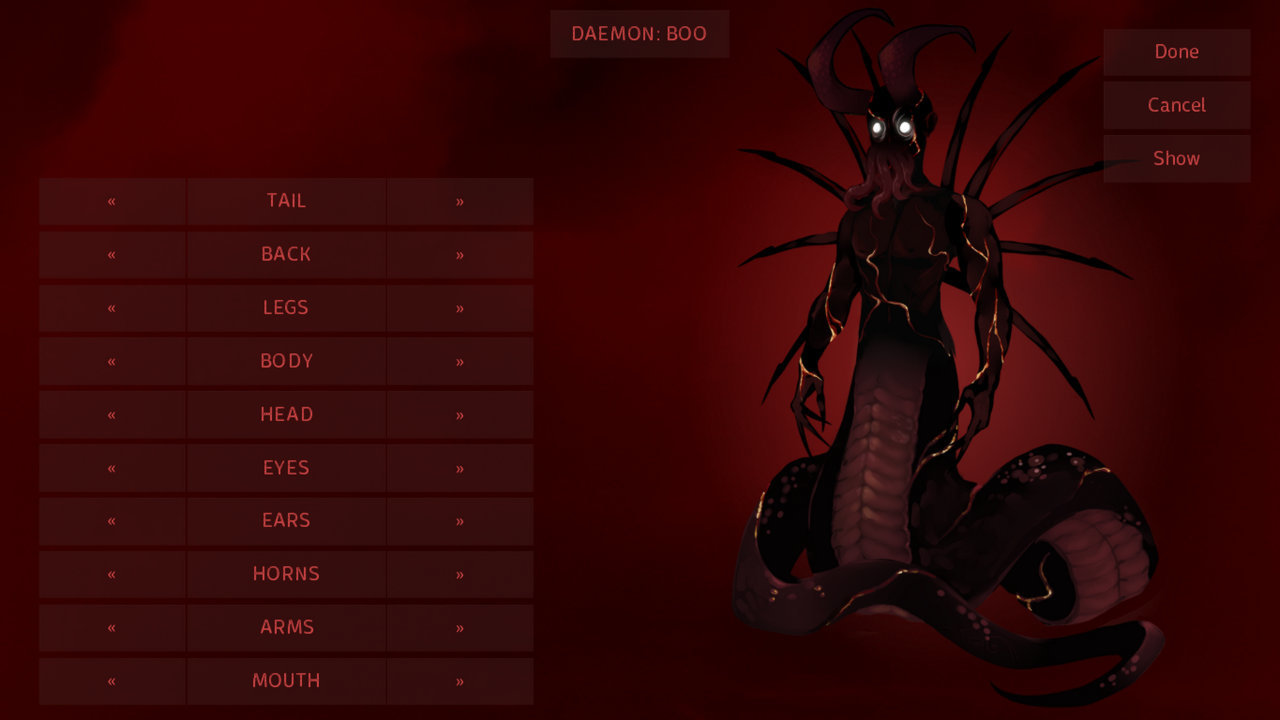