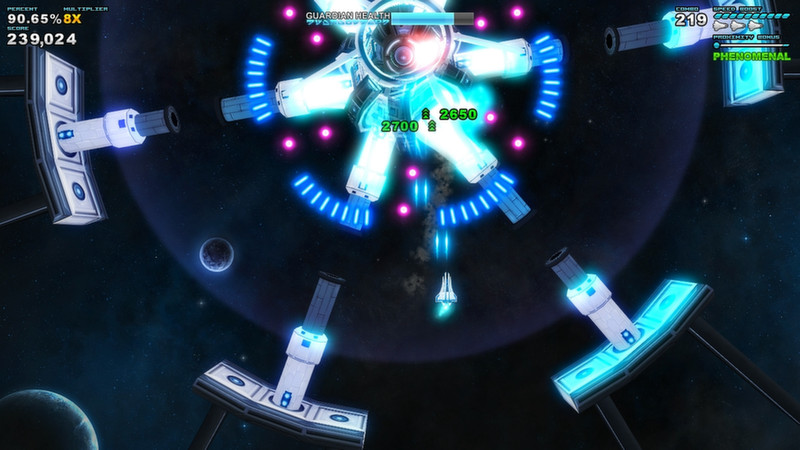 Rhythm Destruction is a rhythm & shoot'em up that aims to combine the best of both genres. Blast and maneuver your way through perilous stages filled with numerous enemies, obstacles and unique boss encounters.

Enemies and objects in Rhythm Destruction are destroyed via timed key presses that go along with the beat of the music. The hand crafted stages are filled with many obstacles, traps, and plenty of bullets that make for unrelenting action. Each stage also includes a unique boss encounter that will put all of your skills to the test. 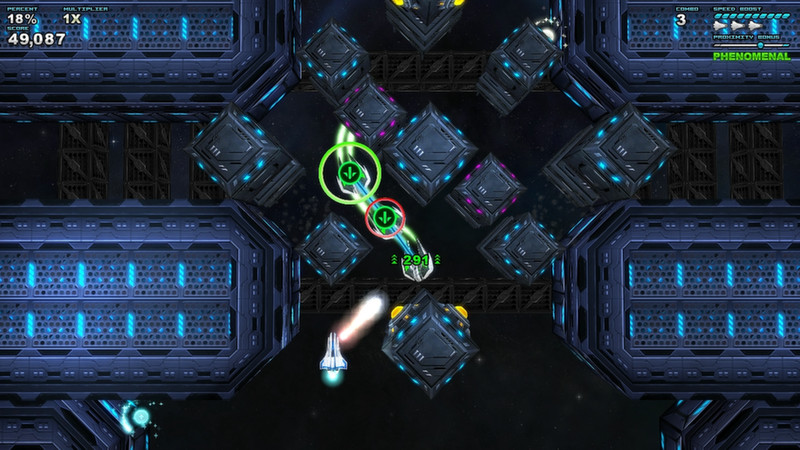 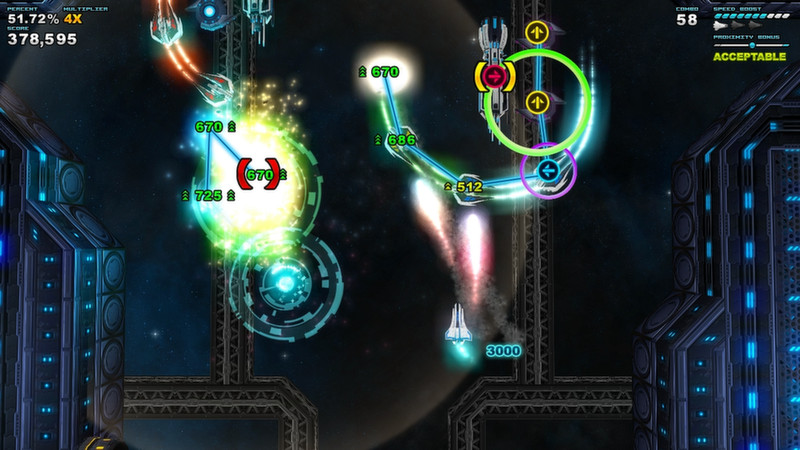 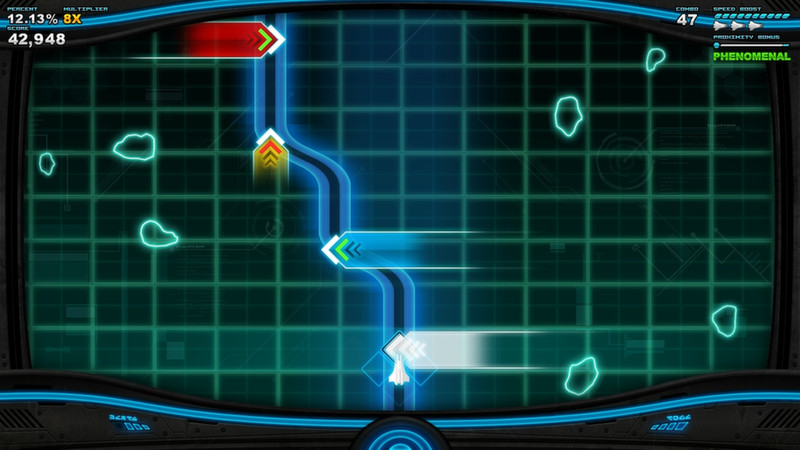 When you play it you might notice theres no main menu music. Kind of weird for a game about music, right? Theres music in the stage menu though.

The graphics and models are pretty basic. I had to restart the second level to make sure i wasn\u2019t doing the mission again because they looked the same. But later levels seemed to have a bit more variety

There was a tutorial. But the game crashed and I couldn\u2019t find it again. So I had to figure out the game myself. Which was a little tricky

Anyway, the game has stages. And it turns out that you fire your weapons at targets by pressing the arrow keys or equivalent at the right time. Doing so in time to the music and being closer to the enemies or something like that scores more points. The game seems to tell you when that right time is by using shrinking green circles around targets. At the same time you need to navigate through obstacles and avoid enemy fire and or crashing into other ships. You won\u2019t feel a connection between the action in the music at first. But this changes as the maneuvers get more complex in later levels. Also you don\u2019t seem to be able to pause the game
\f
Initially you are prompted to select a controller input when you first start the game. Gamepad and mouse are options. I chose keyboard. I couldn\u2019t find the options to change to another input later though. Theres a resolution option. But you can\u2019t actually change the resolution. Aspect ration is in it's place for some reason.

Theres not really a lot of sound in game. Which can feel a bit wierd. But each stage has different music. What can I say about about the music? It\u2019s not really the type really I would usually listen to. However you might like it.

In the third mission I was killed by the boss and failed the mission. The boss then exploded and I got a five star rating. Not sure how that works. The game records high scores. And there are leaderboards for each stage.

I played for almost an hour and got up to like the 4th level. The games is fun Not in the same was as my old favourite from the 90\u2019s Tyrian. But it feels a lot more fresh. Right now I would choose it over the recent humans must die. But I just feel that the gameplay will probably become increasingly sadomasochistic. I could probably squeeze a few hours more out of it at least.

Click www.youtube.com\/user\/SatanovichZ1\/videos\" target=\"_blank\" rel=\"noreferrer\" >here<\/a> for more let\u2019s play videos =). At first, it sounds like a great mix. The only thing is, the execution, or simply the idea doesn't hold well.

I'm a huge fan of rhythm games, and I really like SHMUPs. This game only take the basic of each one without incorporating them seamlessly. It could have been done in a better way, too.

Gameplay at first is very jarring. The player can move his ship around the screen, however the player cannot manually shoot at enemies. Enemies appear on the screen with an arrow above them and a colored ring that slowly collapses onto it. The ring color indicates what kind of note that command is (quarter note, eighth note, sixteenth, note, etc) and the amount of time it takes the ring to close indicates when to press that command. Hitting the correct arrow on the correct beat makes the ship fire on the enemy. Missing the command allows the enemy to remain on the screen and fire upon the player until the player passes them. Some enemies that spawn will not have arrows on them, making them indestructible but still able to fire upon the player. Players can dodge bullets and enemies in typical bullet hell fashion.

Here is where the gameplay becomes a bit convoluted. As I mentioned earlier the skillsets for both rhythm games and bullet hell games require a lot of concentration to not die, combining the two in this fashion makes the game artificially hard. You have to pay attention to which enemies are firing on you and what pattern the bullets are making, as well as pay attention to the enemies with arrows and hit the commands in the correct order. Enemies that are currently firing on you aren\u2019t necessarily enemies that currently have commands on them, which means you will either be hit by a bullet as you try to complete a command, or you will miss a command because you are avoiding bullets.

While it doesn\u2019t do anything bad about both genres, it doesn\u2019t do both necessarily well, and there are other games that do either one better than this one. If you are a lover of both bullet hell games and rhythm games or want to try a pretty original concept, I would suggest buying the game.

See more of the review at: www.skepticalminotaurgames.com\/rhythm-destruction1\" target=\"_blank\" rel=\"noopener\" >http:\/\/www.skepticalminotaurgames.com\/rhythm-destruction1<\/a>. This game looks & sounds easy but its so hard, BUT, its so fun. Its very catchy and addicting. Its one of those games where you can both immerse yourself in it and also go mindlessly at it and just sit back and relax. Id recommend this to anyone. Its fun but challenging.. Meh, not really my type of game. There are plenty of games like this that are much more exciting and challenging. I gave it a shot, but didn't like it.. While very difficult, I would definitely reccomend this game.

I particularly enjoyed the way rhythm gaming was actually introduced into a bullet hell game. While every now and then, you may get pulled away to do pure rhythm gaming feats, most of the time, you're forced to dodge bullets while pressing buttons in time with music. This adds a whole new dimension of difficulty and overall satisfaction upon completion, which I have trouble finding in normal bullet hell games.

Don't even get me started on how the music and visuals help to suck you into the game's atmosphere (even if the textures could use a bit more variation).

Yes, this is unique, I like it.. This is actually a very great game with that unbelievable genre mashup ever! (But why the hell is this underrated anyway?)<\/span><\/span>

Now with this game, you can press the keys to the rhythm to attack and use your movements avoid bullets and obstacles at the same time. That's pretty awesome as it combines rhythm and shoot 'em up together. However this game is difficult at tier 3 and further and you've gotta get better at this game since there's no upgrades or premium items.

However this game has 13 stages\/songs (3 are DLC) to play, complete and master but you can still enjoy this game. One is Dark Angel (composed by F-777) which is really great dupstep but really difficult. But Viper (composed by F-777) will actually challenge your skills for true as it's the hardest stage\/song in this game and you will be failing it a lot.

This game also deserves to be released on Wii U, Switch, PS4 and Xbox One with an ESRB rating of E.

I deserve to play this game since I love both Touhou and the rhythm games (such as Dance Dance Revolution and In The Groove 2)! I also get inspired to play this by the WinDEU Hates You series which I used to look up on YouTube and love but I'm not interested in that fan series anymore because of featuring My Little Pony characters with other franchise characters. (Yea, I hate My Little Pony and especially that internet meme "brony")<\/span><\/span>

Please stop calling out "horrible" on all these songs and I know they're all great and awesome. Can't you see that there's that option to change the sync so you have to set perfectly then you can have the perfect sync for this rhythm game.

You better get this game, enjoy and complete every stages in normal mode in!

I shall become the top high score leader in every songs excluding the hacked scores!. At first, it sounds like a great mix. The only thing is, the execution, or simply the idea doesn't hold well.

I'm a huge fan of rhythm games, and I really like SHMUPs. This game only take the basic of each one without incorporating them seamlessly. It could have been done in a better way, too.

It just doesn't hold well together.. Very fun game. It's like a mix of Raiden and Guitar Hero. It's got a great soundtrack, and some challenging levels. It's definitely worth the money!. Ridiculously fun. 1 part Gradius, 1 part Frequency. I really liked that the beats correspond to the action on the screen and it wasn't just follow the arrows with no real goal other than the end of the song. Fun for scroller fans and beat junkies alike.