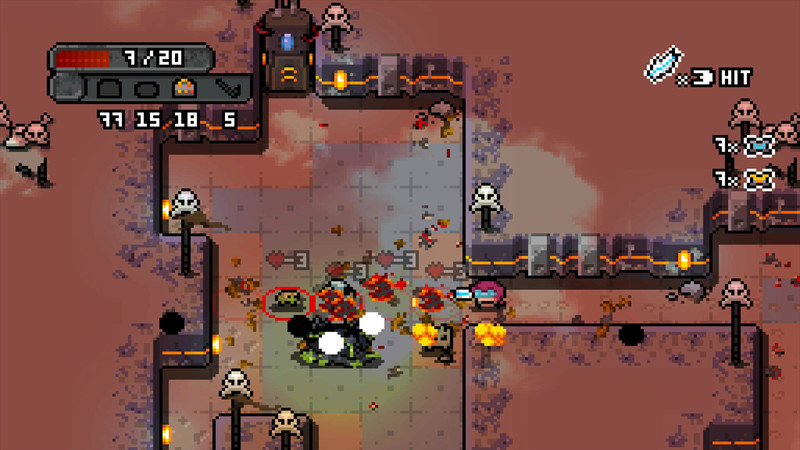 The year 2476, Earth's space-federation has been building moon-bases across the galaxy. One of those moon-bases has been sending a distress signal. Space Grunts are a group of intergalactic "problem" solvers, sent to investigate..

You play one, out of a team, of Space Grunts, and your mission is simple: find your way into the moon-base, and figure out what has happened. You'll have to fight your way through aliens, robots, security drones and base-systems. Find the lower levels of the moon-base, and get to the core of the problems.

Consumables - A large collection of consumables can be found all over the moon base from weapon enhancers, to destructive toys, armor, explosives, system-hacks, and more. Use the items wisely to advance deeper into the moon-base.

Weapons - Starting with three standard Grunt weapons, you will be able to enhance them for more fire-power and range. On your way you'll also find alternate weapons, and melee weapons.

Secrets - There are various ways to complete the game, anomalies leading to weird places, underground routes, and mysterious items to transport you to other area's of the moon-base. On top of these there are secret rooms and area's located all over the base, so never a dull moment!

Can you find the core of the problems? 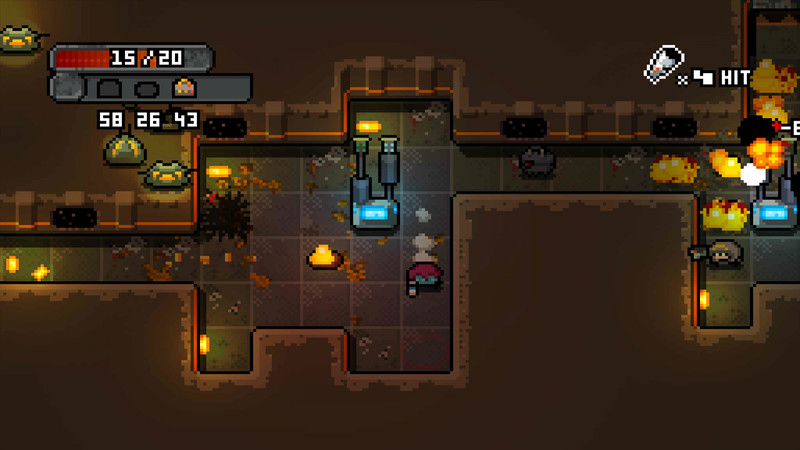 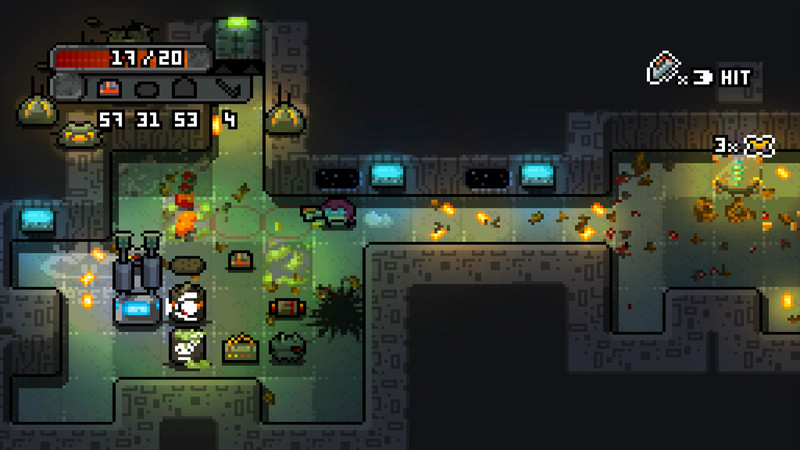 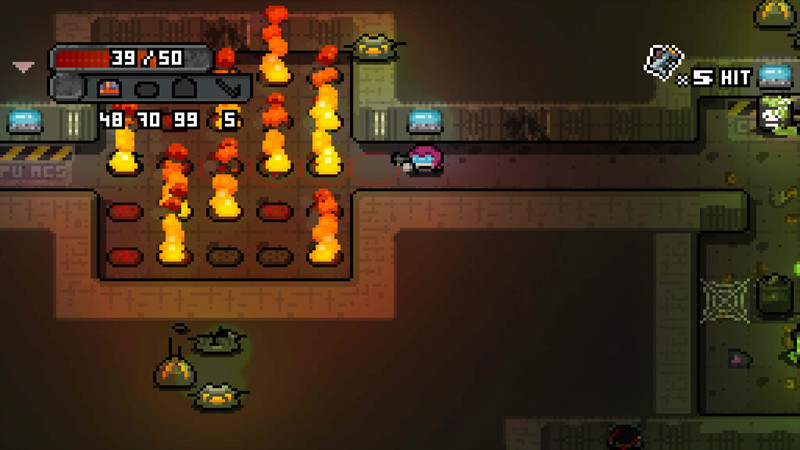 Enjoyable. It could be better with deeper story, loot explanations, and perhaps some mechanics tutorials. Good fun, and pretty game.. This is probably the best game developed by Orangepixel. A really fun experience that's approachable but at the same time has enough depth to keep us playing and wanting more. An important thing missing is sync with the iOS version as other games have implemented, making gamers focus just on one platform and having no incentive to purchase the game on computer and mobile. That would make it just great and I hope the developer considers it for future games -- maybe Space Grunts 2?. It's like a turn-based Nuclear Throne, but I think it looks better. Plenty of action, weapons and pickups to find.. I've really enjoyed this rougelike. Most of my playtime is on the Android version, but the Steam version (I played on Linux) is just as good. (I had a couple of issues with sound on 1.6.0, but that's all.)

There's an extra element of resource management (with weapon ammunition at least) compared to what I'm used to with my limited rougelike experience, and it works pretty well; it encourages you to be consious about what you're using according to the situation. I have moments where I just run around blasting enemies, and moments where I have to stop and think my way out of a tight spot. It's pretty rewarding, and it keeps me coming back (even though I've yet to beat the game).

If you're on the fence, maybe wait for a sale, but otherwise I think this is worth the $10 asking price.. It remberers me strangly of SpaceHulk a boardgame from 1982?!

It's a great game to play some levels every day. I love the visual style.

Best played using a controller.. Space Grunts is a fun little rogueLITE (I'll explain later on why I won't dub it as a roguelike) with charming and unique pixel art and fast turn-based gameplay. It's a fun and addictive time killer and you can find yourself saying "one more run" very often. It's learning curve is very low, meaning anyone can jump in and have a good time, not having to worry too much if the item they are about to use will just straight up kill them.

Space Grunts is fun and it does what it does pretty well, but I can't call it a roguelike. There's not enough nuance. There are no player levels and no character skills (outside of base stats per different character that can't be changed). This means that your gameplay is pretty much completely defined by the drops you get or don't get throughout a given run. Games like The Binding of Isaac do that same thing, but Isaac lets your own skill overcome adversity because of the real-time combat. Turn-based means you can plan your actions, but I don't think it's feasible to avoid damage entirely.

You characters have 3 (4 if you pick up a crowbar) weapons with limited ammo and different uses. You can also find various single-use tech (items) in your travels that heal you, create traps for your enemies, augment your firepower or give you a damage buffer (almost like temporary HP). The limited ammo and single-use items puts a lot of emphasis on strategy and luck, hoping that you get the right ammo or right weapon upgrades or right tech at the right time.

Unfortunately, this game isn't for me, as I felt gameplay felt relatively shallow. However, some of my complaints are the very reason it is so easy for people new to the genre to pick up and play it. I can see this very much being a soft introduction to the much more complex genre of REAL roguelike games (think stuff like Tales of Maj'Eyal, for example). It's obviously crafted with care and in the image of the creator, who seems to be very active on these forums. I love seeing that!. It remberers me strangly of SpaceHulk a boardgame from 1982?!

It's a great game to play some levels every day. I love the visual style. This update is really more a maintenance update as I don't want to do a lot of changes just two weeks before the full release (leaving early access: woohoo!)

So as for the game stuff, just some minor fixes nothing big. Few visual bugs with your "Best score" stuff in the leaderboards, and a possible crash at startup caused by mouse movements.

BUT this version does come with a little extra fun: a very early alpha version of the level editor.

To activate the editor do the following:


1. From within steam, right click on the game and select Properties
2. at the "startup options" add: edit
3. run the game.

If done correctly it gives you a "create" menu item under the quit item in the main menu.

Right now you can create a level, and test the level. but there is no saving/loading implemented yet.. it can also bug out at any time, so don't go crazy on making awesome levels just yet!

The plan is to add steam workshop later so that we can play stand-alone missions created by the community (hopefully).

Feedback on the editor is appreciated! Don't be scared: the interface has seen a change in color, I find this more fitting to the setting of the game and never was happy with the blueish boxes. It's actually a miracle I kept them in for this long!

I also added a few more interface and user-friendly-ness changes to the game, especially for new players (welcome!). This includes a little info on what datacards are all about, but also shows an upgrade dialog when you pick up the Amulet, Space cube, or tech-manual.. so that those event's are more apparent.

enjoy! and as always feedback and idea's are welcome! (really running out of idea's now.. which is good, since the game is mostly complete at this point) Welcome in 2016! and more importantly, welcome to the last update pre-release.. Next week (12th of January) the game will see an official release on Steam, hopefully bringing a lot of new players to the game.

I do need to fix a few things, so that's what this update hopes to do.. please let me know if you run into anything!

Most of the new stuff is in the editor (see previous announcement) which now comes with loading and saving (including pushing it to Steam workshop which is hidden for now). All feedback on the editor is also welcome to help me improve that one and get it ready for real world stuff.. The nice image above basically shows my last 8 months of working on this game. We've come so far and we're not there just yet! ;)

In today's update a lot of fixes to various small things. Some of those were bugs, others are part of the balancing that will now be done more often. The hardest part in game development is getting that right, but we'll get there.

On yesterdays daily run I had my ass handed in level 2, but Aline managed to reach level 16 running into a bug causing the end-boss to be un-destroyable! That shouldn't happen anymore, my night on the couch made sure of that ;)

There is also a "work in progress" save mode added to the game, basically it saves automatically after every completed level.. so if you have to step away from the game for a long time or a power-outage, it should be possible to continue the game at the last save point.. let me know if you run into problems with that! (if you die, or complete the game, or are in a daily-challenge, there will not be a save game) I can't help but keep updating the game, even tho I'm releasing the game officially on Tuesday (leaving early access) I do plan to push some more updates like this one!

Many people complained about sometimes running out of ammo in later levels.. and a few people actually came with a great solution! Which I also liked so here it is, "the recycler"! These devices are randomly found around the moon-base, and you can recycle your items in return for an ammo-pack. The ammo you get is a bit randomized, but you always get at least 4 of every ammo type.

I might change it in future updates so that some items give more ammo or ammo of a specific type, but for now this is a nice solution to the ammo vs item problem ;)

There are also some fixes pushed in this update, and as always let me know if I accidentally broke other stuff ;)