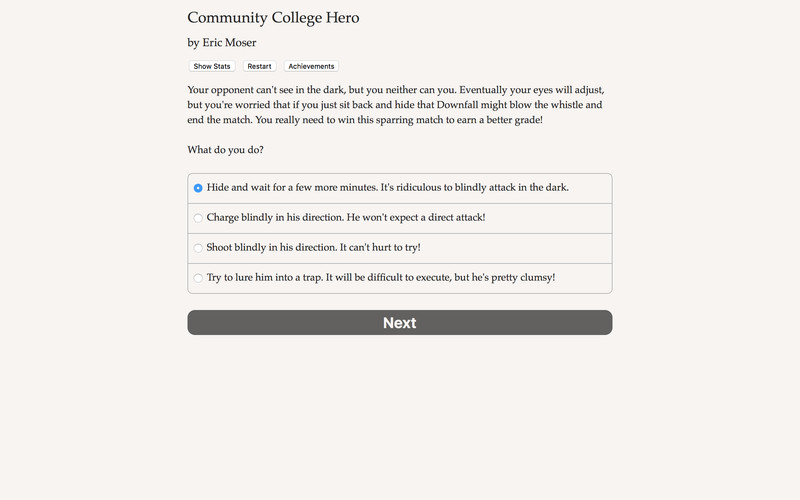 Outwit your professors at superpower school! Ace your exams, date your classmates, and bring down the nation’s most wanted villains to earn your degree.

"Community College Hero: Trial by Fire" is a thrilling 168,000-word interactive novel by Eric Moser, where your choices control the story. It's entirely text-based--without graphics or sound effects--and fueled by the vast, unstoppable power of your imagination.

You’ve won a scholarship to the nation’s newest college course for heroes! But can you discover your classmates’ secret identities before they learn yours? Choose your costume and your mask (and maybe your date for this weekend) and get ready to fight crime and dazzle the citizenry! Be an acrobat, sharpshooter, detective, or soldier, with all the abilities that come with each. Wield brass knuckles, a slingshot, or even retractable roller skates in your shoes. Will you investigate the big bad, or wait until you’ve had more training? Escape liability for damaging other people’s property as you learn to control your new powers, or pay up what you owe?

Will you be a brooder, charmer, traditionalist, or trickster? Step into your new super identity, and claim your place as a Community College Hero! 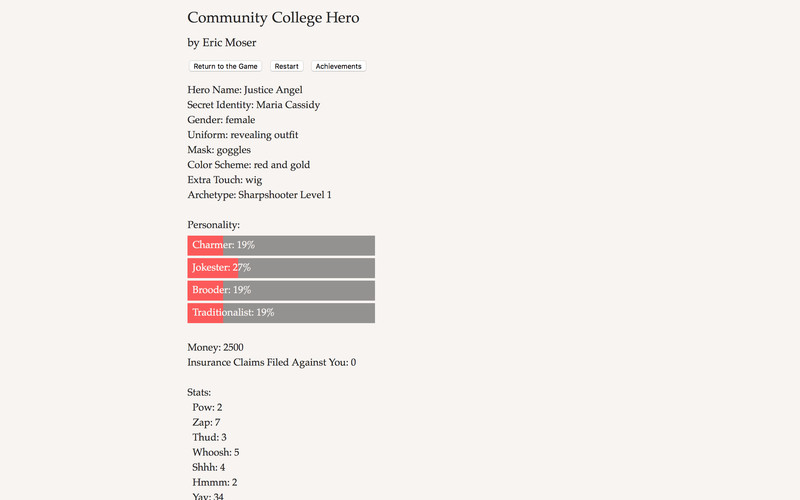 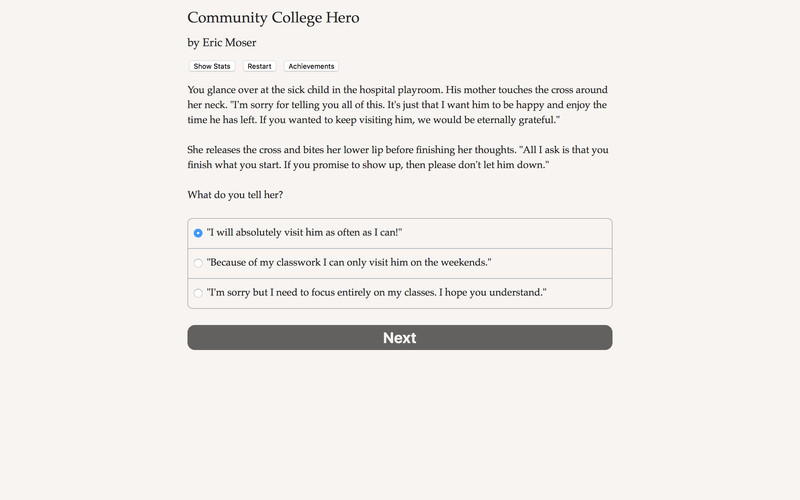 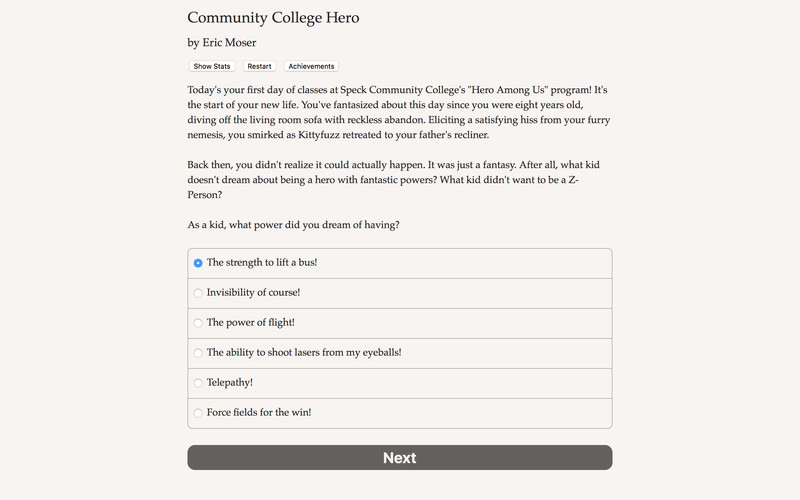 It's a good game! Definitely worth your while if you're into story-rich games. Despite being text-based, the game manages to engage you. You get to adopt a crazy number of personas and the other characters do respond differently to you based on your varying interactions with them. There's a crazy amount of conflict in this game. You will end up picking sides to unlock various achievements and scenarios, and you should pursue all 46 achievements. You'll have a ton of fun in the process! The guides in the discussion forum are super helpful.. every choice you make gets railroaded into something that doesnt matter, every character is unique in the sense of rehashed outlandish anime themes. I don't leave reviews often, but this story hit a real sweet-spot for me for some reason. It's well written, has great characters, and the premise is fairly unique for the genre. If you're wondering why I'm being vague, it's because it's best to go in knowing as little as possible.

Without being too specific:

-And people WILL die

Pick it up, it's a fantastic beginning to a promising trilogy! Plus it's rekindled my writing bug, so to speak. So hats off to Eric.. I very much lked "Choice of Robots" and "Tin Star", but did not find "Community College Hero: Trial by Fire" nearly as entertaining. Some of the characters are interesting (the most intriguing aspect of the game is trying to find out each student's secret) and the game definitely has its moments, but writing is a bit ham-handed and there were two major issues that greatly reduced the enjoyability for me:

- The plot is strictly rail-roaded. There are several occasions where you are offered various choices, only to see the game tell you that what you chose was not possible after all and some of the choices you did not pick occurred instead. There are several odd non-choices, where you are just asked to select an opinion that has no effect on anything. And the worst bit: none of the choices you make actually affect the course of the main story;.basically your choices only affect which relationships and skills are advanced, there are no multiple possible storylines. All these shortcomings are in direct contrast to what I'd expect from a quality multiple-choice game.

- This does not feel llike a complete independent game. You start developing a character and following his\/her story, but in the end everything is just left hanging in the air and you get an advertisement for the sequel \u2013 you are told merely the opening chapters here. In my opinion this should definitely be marketed as part 1 of <n>, so that it would be clear that waiting and further purchases are necessary to get the full story.. Got no choice but to downvote this rather good text adventure.

Why?
Because when I bought it, nowhere does it say it is the first episode (ending rather abruptly), and not a complete experience. And of course, it is from the end of 2015. It is soon 2017 and no continuation has been made.

If at the very least it said in the title it's episode 1, I'd have upvoted, but this is a nono.. Before I knew what had happened, it was 4am when I finished my first playthrough. Instead of studying for actual finals, I played an interactive novel where my character *ahem* negotiates for a higher grade and bombs another class on moral principles. I couldn't have asked for a better time.

(+) Most importantly, the novel is well-written. As in, amazingly well-written. If this novel was published and in a bookstore, I'd scoop the novel up for $20.
(+) Fun and inventive characters. It was impossible to choose a favorite, but Tress is a L'Or\u00e9al goddess.
(+) Lots of character customization. My costume was a hot mess. Also, I love the inclusiveness with options for "asexual" and "non-binary gender."
(+) Lots of romance options. Hey Mob ;)
(+) Did I mention this game is well-written?

(-) The story isn't complete. You'll have to wait for Part Two, but good things come to those who eat their vegetables.
(EDIT: This doesn't mean that the game isn't "unfinished." This is the start of a trilogy and there's enough material in Part One to whet your appetite until Part Two is released. The ending is doesn't feel rushed or ends abruptly.)

I cannot wait to see what happens in Part Two. There are so many unanswered questions! The spoiler contains a semi-spoilerific open-ended question for the author\/anyone who wants to answer. My character wished he had super strength as a kid, so when I knew about Mob's ability, I knew that was the RO for my character. However, there was one line that intrigued me. This line was around Downfall's final exam. Mob mentioned that he felt unusually stronger around the classmates and faculty, so is it possible that my character develops super strength despite not being a Z-Person? Or is it because of Downfall revealing her abilities? Or something else entirely? Who knows?<\/span><\/span>

10\/10 Would accidentally rename myself as Captain Powerless again. One of my favorite CoG games along with Tin Star Hero. Community College Hero easily has some of the best writing out of those types of games along with very gripping emotional scenes!